An overview of the role the legislative branch plays in government and the lawmaking process.

The Tennessee legislative branch of government consists of a bicameral General Assembly (a type of legislature with two branches or chambers) with a Senate and House of Representatives. This structure has existed since the Assembly’s first meeting in Knoxville in the winter of 1796, just before Tennessee became the 16th state in the Union. Members of the General Assembly, or Legislature, are elected by popular vote from districts across the state. Legislators work part-time as lawmakers in Nashville, and part-time living and working in their districts back home.

The primary function of the General Assembly is lawmaking. The Legislature proposes legislation, enacts laws, provides a forum for debate on issues, and secures financing for the operation of state government.

The constitution specifies the size of each chamber. The House has 99 members and the Senate can never exceed 1/3 of the House membership. Thus, the Senate has 33 members. In the other 48 states, representation varies from between 20-67 senators and 40 to 400 representatives. Nebraska is the only state with just one chamber (or a unicameral legislature).

Legislative districts are decided by the General Assembly on the basis of population and must be as equal in size as possible. Both the U.S. Constitution and the Tennessee Constitution require that districts be redrawn based on population every 10 years following the national census.

The General Assembly convenes in the State Capitol in Nashville on the second Tuesday in January of each odd numbered year. Legislative work usually runs through April or May. Afterwards, legislators typically return home to their districts.

During the first few days of session, many items must be taken care of, including: electing the officers of each house, electing constitutional officers, naming committee chairmen and membership, appointing the clerks, and the inauguration of the Governor when appropriate. Once everything is organized, the General Assembly has 90 legislative days over a two-year period to complete its work. The members of the General Assembly spend their time in committee meetings, meeting with constituents, studying legislation, and voting on the bills.

To learn more about legislative session, you can visit the General Assembly's website or find information in the Tennessee Blue Book. 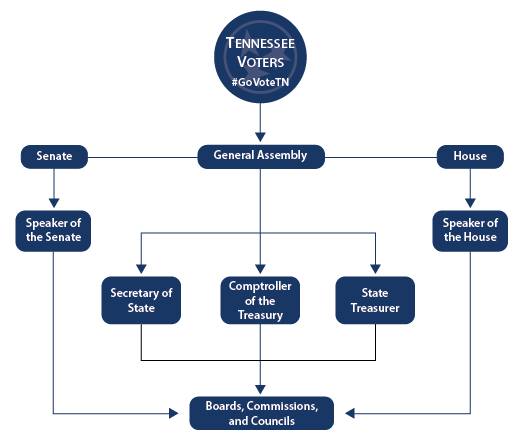