Early Tennessee Land Records Available at the Library and Archives 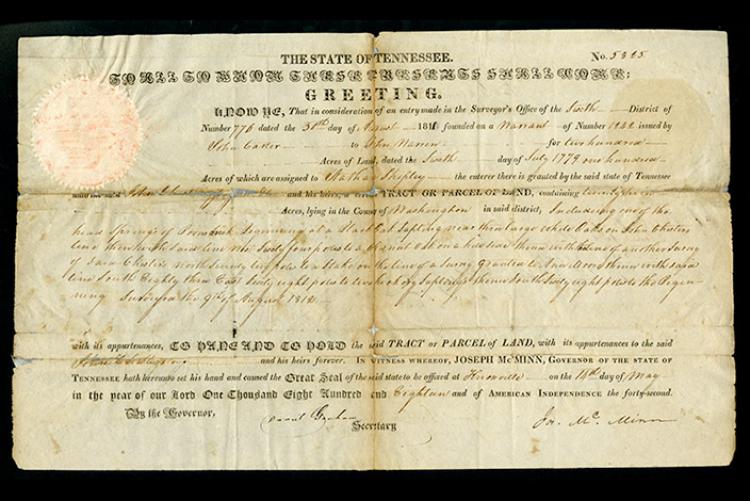 In Tennessee's pioneer days, settlers often had access to one form of currency: land. With the scarcity of cash money, land was the most important form of wealth, commerce and entrepreneurial activity in early Tennessee, as well as the chief magnet that drew people to this area.

First as a territory and then as a state, virtually all of Tennessee's land passed from various governmental jurisdictions to private owners through grants of one sort or another. Politics and land speculation were closely intertwined and land issues were a leading concern of early government.

Now the Tennessee State Library and Archives has made the entire collection of these early land records available to help people better understand the interactions between settlers, citizens, speculators and the public land system. This newly-processed collection of records, titled "Early Tennessee Land Records, Record Group 50," contains a huge volume of the early land records of Tennessee, many of them with the names of pioneer settlers who obtained land from North Carolina Revolutionary War veterans and their heirs.

Other Tennessee settlers purchased public lands from the State of Tennessee during the early decades of the 1800s. The different types of records — warrants, entries, survey documents, plats and the grants themselves — contain valuable clues as to when early Tennesseans came to this country, where they may have settled and how and from whom they obtained land.

"We are proud to finally make these important historical records from the dawn of our great state available," Secretary of State Tre Hargett said. "Tennessee was a major destination of many immigrants on the Southern frontier during the late 1700s and early 1800s. These original handwritten records reveal the complex workings of the system our ancestors used to obtain the land where they built their homes and communities."

Archival work on this collection has been ongoing for the past 20 years. Staff members Ann Alley, now retired, and David Sowell conducted the bulk of the work.

"The volumes and papers in this large collection have been in disorder for many years. Ann Alley once speculated that they had been dumped in the floor and stirred with a stick! We are pleased to open the full collection to the public at long last. I anticipate many research and publication projects will result from the rich historical information they contain," said State Librarian and Archivist Chuck Sherrill.

The collection is available to people visiting the Library and Archives, which is located at 403 Seventh Avenue North, just west of the Tennessee State Capitol in downtown Nashville. The Library and Archives is open from 8 a.m. until 4:30 p.m. Tuesdays through Saturdays, with the exception of state holidays. A limited amount of free parking is available around the building.