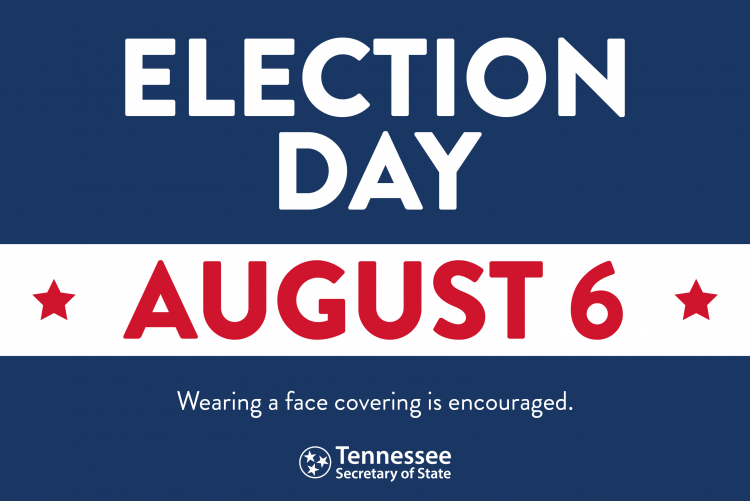 NASHVILLE, Tenn. – Tennesseans will head to the polls across the state on Thursday, Aug. 6, to vote in the State and Federal Primary and County General election.

“Election officials across the state have spent months preparing for this election to ensure the safety of voters and poll officials,” said Secretary of State Tre Hargett. “I encourage voters to do their part on Election Day and follow social distancing protocols and wear a face covering.”

Voters should expect to see signs with safety instructions at their polling locations. Poll officials will be wearing face coverings and are trained in social distancing protocols.

Polls open at various times, depending on the county. A list of when polls open in all 95 counties is available on sos.tn.gov. All polls in Tennessee close at 8 p.m. EDT/ 7 p.m. CDT.

Early morning, noon and 5 p.m. are peak times at the polls as people typically vote before work, after work or on their lunch breaks. Being flexible and casting your ballot in the midmorning or midafternoon may shorten your time at your polling location. Frail, physically disabled or visibly pregnant voters should tell their election officials if they are unable to wait in line to vote. The law allows these voters to move through the process faster.

Voters need to bring valid (may or may not be current) photo identification to the polls. A Tennessee driver license or photo ID issued by the Tennessee Department of Safety and Homeland Security, Tennessee state government or the federal government are acceptable even if they are expired. College student IDs are not acceptable. More information about what types of ID are acceptable can be found on sos.tn.gov by calling toll free 1-877-850-4959.

State law requires polling locations, and the area within a 100-foot boundary of the entrance to remain campaign-free zones. Tennessee law prohibits the display or distribution of campaign materials and the solicitation of votes for or against any person, party or question on the ballot in these areas. Voters wearing campaign-related clothing or paraphernalia will not be allowed within the 100-foot boundary.

Tennesseans can view voter-specific information including locations, poll hours of operation, sample ballots and much more with the GoVoteTN app or online at GoVoteTN.com. Download the GoVoteTN app for free in the App Store or Google Play.

More than 578,000 Tennesseans voted in person or absentee during the two-week early voting period, which ended on Aug. 1. A comprehensive report by the Division of Elections showing how turnout compared to primary elections in 2012 and 2016 is available on sos.tn.gov.

The Secretary of State is planning to post unofficial State and Federal Primary election results from early voting and Election Day on Aug. 6 at elections.tn.gov. However, due to the larger number of absentee ballots cast during this election, voters should be prepared for results to possibly be delayed.

“The tabulating of absentee by-mail ballots can begin when the polls open on Election Day in each county,” said Coordinator of Elections Mark Goins. “In anticipation of a substantial increase in absentee by-mail ballots, the state purchased additional scanners to help counties with the counting process. However, even with additional scanners and workers, election results could be delayed.”

For more information on the voting process, go to GoVoteTN.com or call the Division of Elections toll-free at 1-877-850-4959.