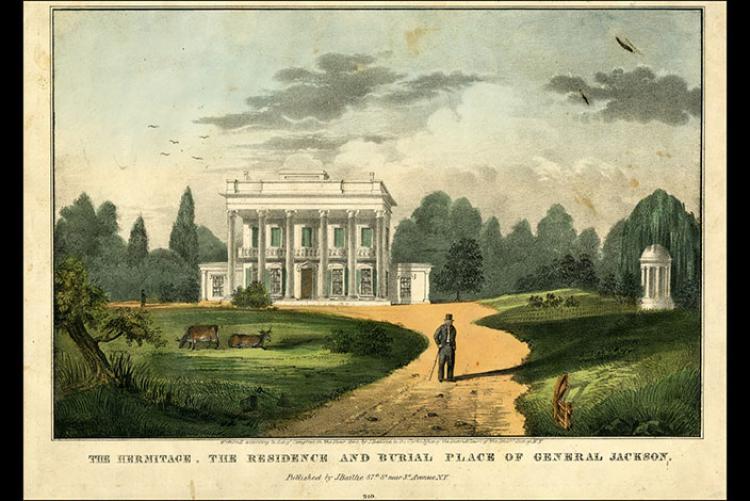 Artist rendering of The Hermitage, home of President Andrew Jackson

Born 250 years ago this month, Andrew Jackson remains one of Tennessee's most iconic and controversial political figures. The former United States president is celebrated for his popularity with common folk and his military skills, but reviled for his headstrong temperament and his troubling relations with Native Americans.

The workshop, titled "Andrew Jackson and his Legacy," will run from 9:30 a.m. until 11 a.m. on that day in the auditorium of the Library and Archives building, which is located at 403 7th Ave. North in downtown Nashville.

"Andrew Jackson is one of Tennessee's most important historical figures so it is very helpful for researchers to have more information about him available online," Secretary of State Tre Hargett said. "This presentation will be a useful primer on the materials that will be included in the Tennessee Virtual Archive exhibit."

Assistant State Archivist Wayne Moore and Archival Assistant Zachary Keith will talk about the collections of Jackson's papers available at the Library and Archives, which include a version of the only known photograph of Jackson, personal letters, original maps from the War of 1812, political cartoons, campaign broadsides, engravings and lithographs. The Library and Archives also has papers from some of Jackson's chief associates, including John Overton, John Coffee, James Winchester, William Carroll and William B. Lewis.

During their presentation, Moore and Keith will discuss topics ranging from Jackson's family life with his wife Rachel and their adopted children, to Jackson's duels with rivals, to his management of his plantation and his military and political exploits.

Although the event is free and open to the public, reservations are required because of seating limitations in the Library and Archives auditorium. To register for the event, please use this online link: https://andrewjackson250.eventbrite.com

The Library and Archives building is located directly west of the Tennessee State Capitol building. Free parking is available around the building on Saturdays.