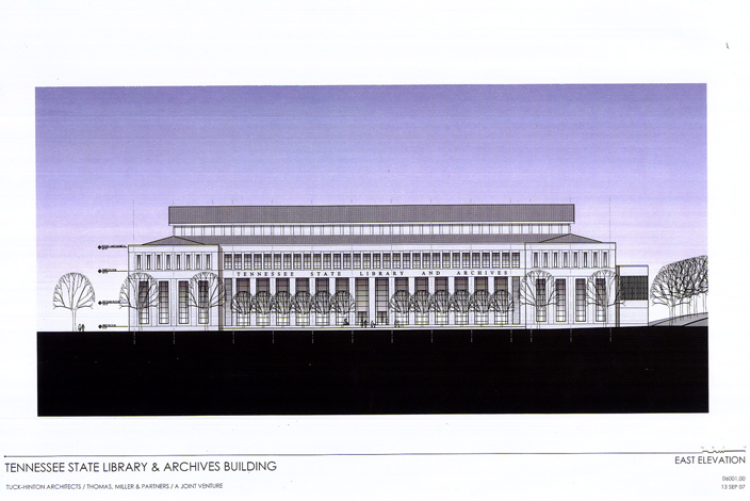 As the legislative session winds down, I am cautiously optimistic that the General Assembly will include funding for a new Tennessee State Library and Archives building in the next state budget. I am optimistic because I have heard from many House and Senate members who support funding for the new building. But I am also cautious because I believe there are some lingering misconceptions about this project.

One of the biggest misconceptions is that the Library and Archives should focus on creating electronic versions of its records instead of trying to find space for them in a new building. There are several points to make about that.

First of all, the Library and Archives already has an active program in which digital copies of records are being created and made available online. This effort is a very important part of our ongoing strategy to ensure access to records for people who might not be willing or able to travel to the Library and Archives building in downtown Nashville.

However, it’s also important to understand that the Library and Archives has millions of pages of documents, photographs and maps that haven’t yet been electronically scanned. Making digital copies of all of them within a reasonable time would be cost prohibitive costing in the hundreds of millions, far more than what a new building is expected to cost. Scanning of documents would have to continue forever since the Library and Archives receives more records from state agencies and private donors every week.

There’s also a widely-held belief that digital records would last forever. This simply isn’t true. Digital files are susceptible to becoming corrupted. As anyone who has dealt with corrupted files on a personal computer knows, it isn’t always possible to retrieve them once they’re lost and other technical elements become obsolete including software that is no longer supported.

Just for the sake of argument, though, let’s say we could digitize all of the Library and Archives’ records quickly, cheaply and without fear that they might turn into unreadable gobbledygook within a decade or less. Would you really want to get rid of the original historic documents? I think most of us have seen a digital copy of the Declaration of Independence at some point in our lives, but that doesn’t mean that priceless originals are ready for the paper shredder.

Another misconception is that the Library and Archives simply has a storage problem that could be fixed by renting warehouse space. Most warehouses don’t have the type of temperature and humidity controls needed to preserve sensitive old records. Then there are security considerations to ensure valuable documents don’t grow legs and end up appearing on an online auction website.

A bigger issue concerns public access. If you were to walk into the Library and Archives building and request any record there, the staff could produce what you wanted within a matter of minutes. The same wouldn’t be true if some records were kept in an off-site warehouse, where it might take a day or more to find them and make them available.

A warehouse wouldn’t fix the problems at the existing building, anyway. The building, on Capitol Hill, which is 65 years old, has only 15 public parking spaces available to patrons. Additionally, the building has a major handicapped access problem which causes wheelchair users to use a back door by the loading dock and to be escorted into the building’s public space by security. The building is too small for many tour groups to visit, especially student groups. And the records already being stored there are at risk of mold and mildew damage because of the building’s declining condition.

The most damaging misconception of all is that a new building is just a “want,” not a “need.” The Library and Archives is required by state law to store official state records and make them available to the public. The staff there doesn’t have the option of hanging up a “no vacancy” sign when more records arrive at its doorstep.

In fact, the need and value of our holdings hit home in a meaningful way to the families who lost everything in the tragic Gatlinburg wildfire last fall - including marriage certificates needed to prove their legal statuses. Those records have been preserved because copies were available at the Library and Archives.

Funding for a new building has been in limbo for almost a decade so we need a solution. A famous Tennessean named Elvis Presley once sang: “It’s now or never.” This is where we are with regards to this important and worthy project. Without action now, current and future Tennesseans will lose accessibility to our state’s valuable and historic records and our ability to preserve these documents will continue to be diminished.

Tre Hargett is Tennessee’s Secretary of State. His office oversees the operations of the Tennessee State Library and Archives.