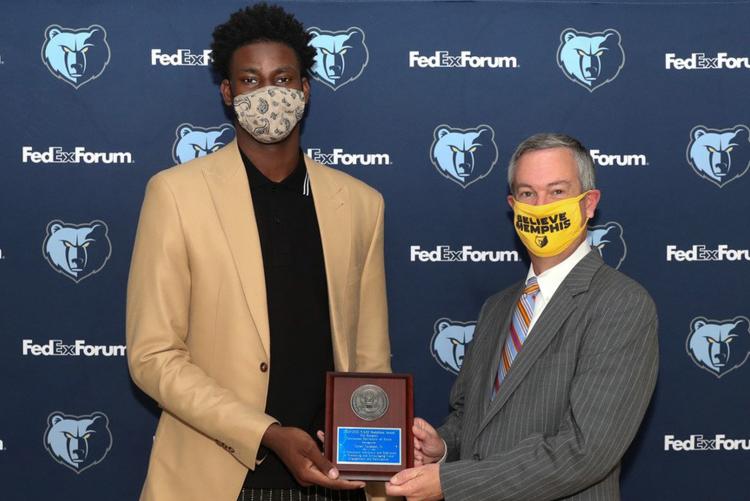 NASHVILLE, Tenn. – Today, Tennessee Secretary of State Tre Hargett presented Jaren Jackson Jr., a forward with the Memphis Grizzlies, with a National Association of Secretaries of State (NASS) Medallion Award for his passionate advocacy and dedication to promoting and encouraging voter engagement and participation.

“Jaren Jackson Jr. is a star on and off the court. We could not have asked for a better advocate for our Your Vote Matters campaign,” said Secretary Hargett. “Jaren has made a significant impact by encouraging Tennesseans to register and working with our office to help voters get accurate election information. I am proud to present him with a NASS Medallion Award.”

The NASS Medallion Award recognizes outstanding service and dedication to furthering the National Association of Secretaries of State's mission. Individual secretaries of state may present the award to honor individuals in their state who promote NASS's goals in one or more of four areas: elections, civic education, service to state government or a commitment of giving.

“First off I want to thank you, Secretary Hargett, for taking time out of your day to come and be here with me and the Grizzlies for this honor,” Jackson Jr. said this morning after accepting the award. “I think part of the platform we have, that I have been blessed with ever since I got drafted, is that I get to make a difference in the community. Those are things that are long lasting and make a difference. Now, more than ever, voting is important and I have made that known. That has been one of my staples, something that my parents have instilled in me. ‘Your Vote Matters’ was something that I was able to contribute to this year and that was amazing. At the end of the day, this means more to me than so much. Just because it is part of the community, and I know how much everybody in Memphis cares about me, as I care about them. This is a great honor.”

The Your Vote Matters campaign encourages all eligible Tennesseans to make their voices heard in 2020 by registering to vote and by casting a ballot during early voting or on Election Day.