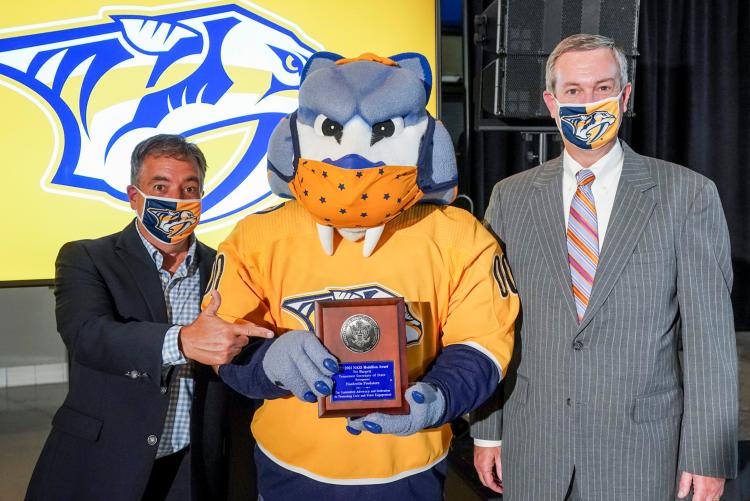 NASHVILLE, Tenn. – Today, Tennessee Secretary of State Tre Hargett presented the Nashville Predators with the National Association of Secretaries of State (NASS) Medallion Award for their advocacy and dedication to promoting civic and voter engagement through their partnership with our Your Vote Matters campaign.

"I'm honored to present the Nashville Predators organization with the NASS Medallion Award," said Secretary Hargett. "More Tennesseans are registered to vote and ready to make their voice heard at the polls thanks to the Preds' continued commitment to our Your Vote Matters campaign to increase civic engagement."

The NASS Medallion Award recognizes outstanding service and dedication to furthering the mission of the National Association of Secretaries of State. Individual secretaries of state may present the award to honor individuals in their state who promote the goals of NASS in one or more of four areas: elections, civic education, service to state government or a commitment of giving

"This award means more to our organization than I can express,” Predators President & CEO Sean Henry said. “There is nothing more important than having your voice heard. To receive [the NASS Award] for all of Smashville, not just our organization, but for all of our fans and our players that played a big part in getting the messaging out, it was really nice because there's nothing more important to move this community forward than first, registering to vote and then, obviously participating in the vote.”

The Your Vote Matters campaign encourages all eligible Tennesseans to make their voices heard in 2020 by registering to vote and exercising their right during early voting or on Election Day.