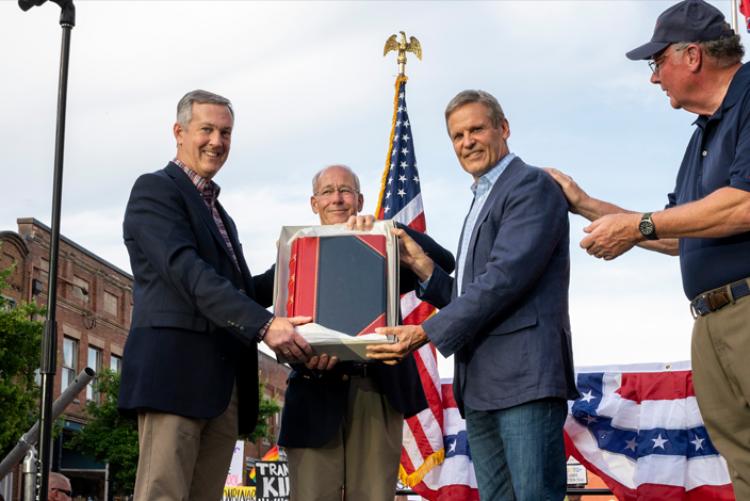 NASHVILLE, Tenn. – Secretary of State Tre Hargett will be delivering a historic copy of Washington County’s first property records to Jonesborough on June 1, 2021, a date which also marks the 225th anniversary of Tennessee’s statehood.

Known as “Deed Book A,” the document recorded the first land purchase—dated March 19, 1775—made in territory that ultimately became the state of Tennessee, marking Jonesborough as the oldest city in the state. The ledger was part of the state land records collection at the State Library & Archives, where it has been preserved for many years.

“I am so pleased that we were able to find a way to bring our state’s first Deed book, ‘The Watauga purchase’ which was a land purchase between the settlers and the Cherokee back to Jonesboro where it belongs,” said Sen. Crowe. “I am especially proud to have been a part of this as my great great grandfather was ½ native American. I want to thank Secretary of State Tre Hargett for his work in helping to make this happen. The Deed book left us for Nashville in 1897 as part of our county’s exhibit for the state centennial celebration on horseback and we plan on bringing it home in a horse drawn carriage, as well.”

"One of the most exciting minutes during my first session as a State Representative was being called to the office of the Secretary of State,” said Rep. Alexander. “When Tre Hargett told us that Deed Book A would make its journey back home to Washington County, I could hardly hold back my emotions. My hometown of Jonesborough, our oldest town in Tennessee, will finally have a piece of its history back. There are so many who have worked and researched to make this happen. I am especially grateful to Tre Hargett and his staff for everything.”

“The deed book is so very important to Tennessee’s history,” said Rep. Hicks. “Sometimes we take history for granted in today’s world, we are excited to see this book come back to Washington County. A special thank you to Secretary of State Tre Hargett, Senator Rusty Crowe and Representative Rebecca Alexander for their hard work on getting this deed book back home. How fitting to have this deed book brought back to Jonesborough, the oldest town in Tennessee, on a horse and buggy.”

“We’re all glad to have the deed book home where it belongs!” said Senator Lundberg.

“It is an honor to work with Senators Crowe and Lundberg as well as Representatives Alexander and Hicks. This effort truly revealed how deeply dedicated these General Assembly Members are to preserving Tennessee’s rich history. The Tennessee State Library and Archives is grateful for their support,” said Secretary Hargett.