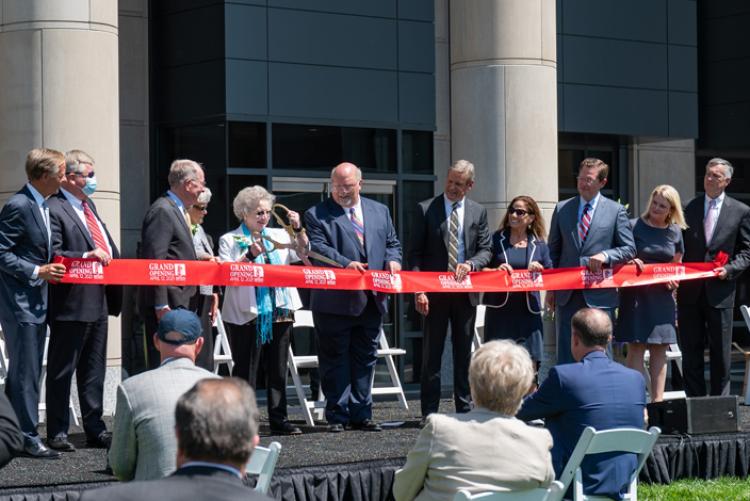 “Today we give new life to a State Library and Archives that is chock full of stories, the raw materials of history that give meaning to our lives,” said former Senator Alexander. “We are grateful to Gov. Lee and Sec. Hargett for seeing through to the finish this important project that began in the 1990s and got a big boost from Gov. Haslam.”

“As we celebrate 225 years of statehood, we’re fortunate to have a state-of-the-art facility that will preserve Tennessee’s rich history,” said Gov. Lee. “The new Tennessee State Library and Archives Building will document the stories of Tennesseans who have shaped our great state, and I thank Secretary Tre Hargett for his leadership in bringing this project to completion.”

“Our state has a rich history full of stories from the generations that came before us,” said former Gov. Haslam. “Now we have a building that can capture that history and keep it safe for generations to come. Congratulations to Secretary Hargett and his team for making this happen.”

“The new Tennessee Library and Archives is a state-of-the-art facility every Tennessean should visit at least once. Tennessee has a great and proud history. That history is preserved and protected by our state Library and Archives,” said Lt. Gov. McNally. “The library has always been an outstanding resource for all Tennesseans to study and research their state’s history. With this new facility, our state records, documents, newspapers and history will be more protected and accessible than ever. I am grateful to Tennessee Secretary of State Tre Hargett, State Librarian Chuck Sherrill and countless others who made this dream a reality for all of Tennessee.”

“This is an historic day for all Tennesseans, as the new Library and Archives is now officially open for business,” said Speaker Sexton. “The effective partnership between our General Assembly and Secretary Hargett in recent years has turned what once was a vision into a spectacular reality that is this state-of-the-art facility. Our new Library and Archives will better preserve Tennessee’s historical collections and make them even more accessible to current and future generations.”

After the ceremony, attendees were invited to enjoy tours of the new 165,000 square foot building.

“The journey from the idea for this new building to today was long and not without obstacles,” said Secretary Hargett. “We would not be here today without the strong support from the members of the Tennessee General Assembly as well as Governor Haslam who placed this building his budgets. Additionally, I am grateful to so many others who advocated for and contributed their time and talents to this building that will preserve Tennessee history for the next 100 years."

Founded in 1854, the State Library, a division of the Department of State, was created to collect, preserve and provide access to Tennessee's historical records and resources in accessible formats. In 1919, the State Archives program was added, creating the Tennessee State Library and Archives. Today, the Library and Archives is Tennessee's premier historical research facility and actively promotes the development of local libraries and archives across the state.

"We have been blessed to work with so many dedicated professionals who helped bring this project to fruition, including Tuck Hinton Architects and Thomas Miller & Partners, Turner Construction, the current and former members of the State Building Commission, the Department of General Services and Strategic Technology Solutions," said Sherrill. "We are excited to welcome visitors to this incredible new facility that will serve the people of Tennessee for generations to come.”

The Library and Archives is holding an open house for the new building at the intersection of Rep. John Lewis Way N. and Jefferson St. in Nashville on Tuesday, April 13, from 9 a.m. to 3 p.m. CDT. Visitors are invited to take self-guided tours. Staff will be available to explain the new features and work done in each area. Reservations are not required to attend the open house.

About the Tennessee State Library and Archives
The office of Tennessee Secretary of State Tre Hargett oversees the operations of the Tennessee State Library and Archives. By law, it is required to preserve Tennessee's legal and civic history by housing the archives of state government and collections of records from families, churches, businesses and organizations. TSLA is home to several notable historical documents, including Tennessee's Constitutions, letters from Tennessee's three presidents, Civil War diaries, records of 55 past Governors of the State and original records and maps of the State of Franklin. The collections include copies of virtually every book published about Tennessee and Tennesseans. Original documents from court cases and legislation, along with audio recordings of legislative proceedings since 1955 are preserved by TSLA. Copies of the records from every Tennessee courthouse and all surviving Tennessee newspapers can also be viewed in the library's collections.