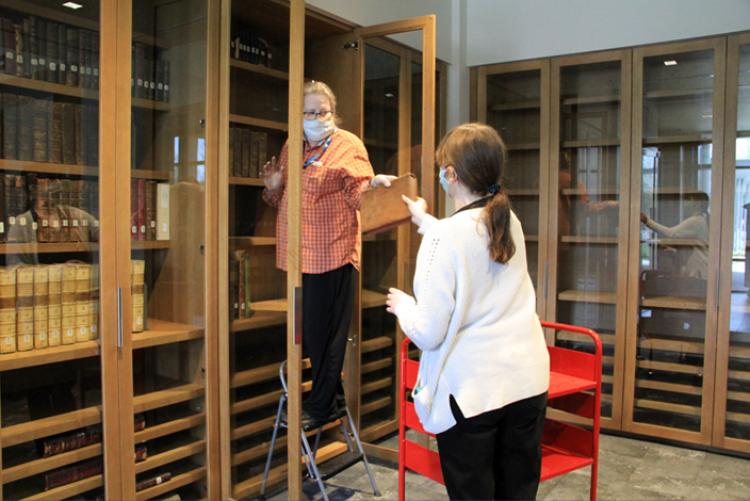 NASHVILLE, Tenn. – The Tennessee State Library and Archives staff are actively transferring more than 26 miles of content to their new building before it opens to the public on April 13, 2021.

A division of the Department of State, the Library and Archives collects and preserves books and records of historical, documentary and reference value, focusing on items related to Tennessee. It is Tennessee's premier historical research facility and actively promotes library and archival development throughout the state.

“The Library and Archives staff have shown exceptional professionalism and perseverance during the enormous undertaking of the move to our new state-of-the-art facility,” said Secretary of State Tre Hargett. “The care and thought they are putting into safely transporting our rare historical documents will ensure that Tennessee’s history is preserved and accessible for future generations.”

“For more than a year, our team has been preparing to safely and efficiently move our vast collections. We not only had to keep track of the large volume of items, our conservators also had to create storage containers using archival materials to safely transport some of the fragile or oversized items in our collections,” said Chuck Sherrill, Tennessee State Librarian and Archivist. “Additionally, our decision to hire reputable professional movers with experience in moving archival materials and robotic systems has been critical to the success of this move.”

As the official repository for the permanent records of the executive, legislative, and judicial branches of state government, the Library and Archives houses 6,635 boxes of official papers from Tennessee's first Governor John Sevier to Bill Haslam. The collection also includes 12,500 boxes of records from boards, commissions, departments and agencies within state government and 8,750 boxes of Tennessee Supreme Court records.

Beginning in 1955, Tennessee was one of the first states to record its General Assembly and committees' proceedings. Current digital recordings are stored electronically, but the Library and Archives has 50,330 cassettes of earlier legislative recordings.

Either individually or as part of a larger work, the Library and Archives collection is estimated to include over a million photographs. The collection also includes more than 5,000 maps, some of which are oversized and required special attention to be safely moved.

The Library and Archives also has more than 360,000 books and journals on subjects related to Tennessee or written by a Tennessee author, 13,066 manuscripts, 3,237 genealogy reference texts, 14,041 Tennessee reference texts and 3,044 audio-visual materials.

The Library and Archives opens to the public in its new location on the northeast corner of Bicentennial Mall at the intersection of Rep. John Lewis Way N. and Jefferson St. on April 13. Email ask@tsla.libanswers.com to make an appointment.

About the Tennessee State Library and Archives
The office of Tennessee Secretary of State Tre Hargett oversees the operations of the Tennessee State Library and Archives. By law, it is required to preserve Tennessee's legal and civic history by housing the archives of state government and collections of records from families, churches, businesses and organizations. TSLA is home to several notable historical documents, including Tennessee’s Constitutions, letters from Tennessee’s three presidents, Civil War diaries, records of 55 past Governors of the State and original records and maps of the State of Franklin. The collections include copies of virtually every book published about Tennessee and Tennesseans. Original documents from court cases and legislation, along with audio recordings of legislative proceedings since 1955 are preserved by TSLA. Copies of the records from every Tennessee courthouse and all surviving Tennessee newspapers can also be viewed in the library’s collections.