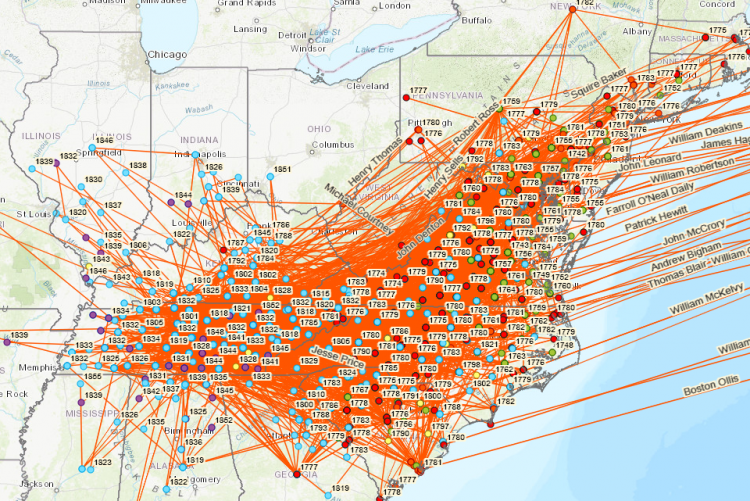 As our nation prepares to celebrate Independence Day, the Tennessee State Library & Archives has launched Patriot Paths, a new project that uses Revolutionary War pension records to map the paths that these soldiers took before and after their service. The project, which is still in progress, was unveiled by State Librarian and Archivist Chuck Sherrill at the National Genealogical Society’s recent annual convention.

Thousands of veterans flooded into Tennessee at the conclusion of the war, and about 2,000 pension files exist for those who came here. Since most of the soldiers were not eligible for a pension until they were in their 80s, the number who received a pension was relatively small compared to the number who served.

Staff and interns at the Library & Archives pored over those pension files to find the dates and places where the soldiers were born, married, enlisted and died. Soldiers who had been born throughout the colonies and even Europe ultimately made their way to Tennessee. After the war, many crossed the mountains from Virginia and North Carolina, but some came from as far away as New York and Massachusetts.

That information was added to a database and then coordinated with GIS mapping software. The result is Patriot Paths, where historians and genealogists can search for veterans and study the patterns of migration.

“Patriot Paths uses modern mapping tools to tell the stories of those who fought to secure independence at the time of our nation’s founding,” Secretary of State Tre Hargett said. “I’m proud of the continued efforts of the Library & Archives to find innovative ways to make records like these more accessible.”

For example, Patriot Paths allows researchers to see that three pensioners who ended up in Sumner County – William Proctor, Albert Hendricks and Thomas Milbourn – all lived in Rockbridge County, Virginia, during the Revolutionary War. Moreover, all were originally from Maryland.

Sherrill asked, “What does this connection between these soldiers mean? Are they related? I don’t know, but if one of them was my ancestor, I’d start learning about the other two to see what else they have in common.” Genealogists commonly use wills, deeds and other records at the Library & Archives to find more information about their ancestors.

Historians can also use Patriot Paths to learn more about this period in American history. “We learned that an unusually high number of Tennessee pensioners came from Orange County, North Carolina,” said Sherrill. “We don’t yet know why, but Patriot Paths provides the data to help us ask new questions about who came to Tennessee and what motivated them to launch into the wilderness.”

The public is invited to visit the site and conduct searches, but Sherrill asks that they remember it is a work in progress. Data has been entered on only 1,200 of the pensioners so far.

Patriot Paths can be accessed on the Library & Archives website at sos.tn.gov/tsla or by clicking here.