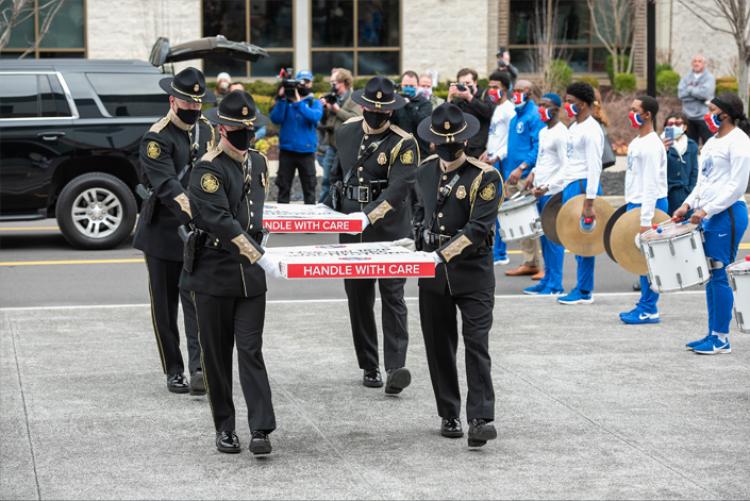 NASHVILLE, Tenn. – Today the Tennessee State Library and Archives (TSLA) with the assistance of the Tennessee Highway Patrol (THP), with support from the THP Honor Guard, transported Tennessee’s three constitutions from their current building to their new, soon to open home on Bicentennial Mall. Preserving Tennessee’s legal and civic history is among TSLA’s statutory responsibilities.

Tennessee’s three Constitutions, first written in 1796 and revised in 1834 and 1870, are the highest valued and most historically significant items in TSLA’s collection.

Tennessee’s first constitution came into effect on June 1, 1796, concurrent with Tennessee's admission to the Union. At the time, Thomas Jefferson described it as the "least imperfect and most republican of the state constitutions."

In the new building, Tennessee’s constitutions will be on display for a limited time. Replicas of the documents will be featured in a permanent display. Digital copies, along with full transcriptions are available online in the Tennessee Virtual Archive.

The new 165,000 square foot TSLA building includes a climate-controlled chamber for safely storing historic books and manuscripts with a space-saving robotic retrieval system. A new blast freezer will allow TSLA staff to help save materials damaged by water or insects following floods and other disasters. The new facility also has classrooms for student groups and meeting space for training librarians and archivists.

The larger and more technologically advanced building is a major upgrade from TSLA’s current 1950s era home. The new facility has the much-needed space to properly house collections, improved climate controls and increased handicapped access. The extra space and efficiency will increase TSLA’s capacity by nearly 40 percent from 542,700 to 759,500 items.

TSLA’s new building will open to the public with limited capacity starting April 13, 2021.