The Secretary of State's office has become aware of a new scam where individuals are being asked to provide personal information.

The Secretary of State's office has become aware of a new scam where individuals are being asked to provide personal information. 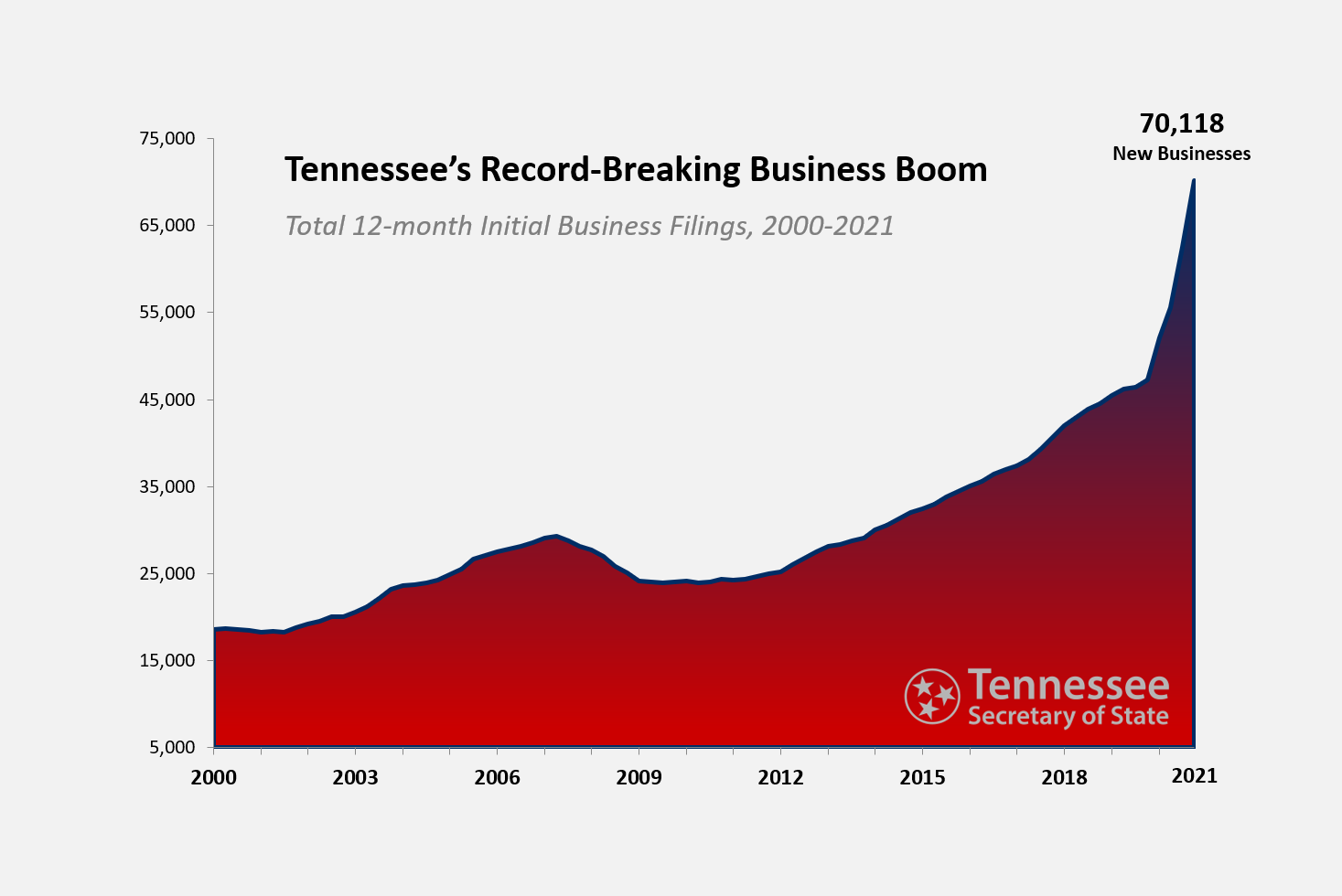 The Tennessee Quarterly Business and Economic Indicators report issued by Secretary of State Tre Hargett’s office shows that 70,118 businesses filed over the past year and 19,983 entities filed in the second quarter of 2021, the highest quarterly total ever recorded.

“The entrepreneurial spirit is alive and well in Tennessee. Our business-friendly environment encourages investment and jobs,” said Secretary Hargett. “The record number of firms choosing to establish in Tennessee is a testament to the stewardship of our state leaders and an encouraging sign for the future.”

The second quarter of 2021 is the fourth straight quarter where new establishments grew by over 30 percent from the prior-year quarter. This level of growth is roughly two to four times larger than strong quarters in the past. Tennessee has seen positive year-over-year growth in initial filings for 38 consecutive quarters.

Typically, growth in business filings leads to growth in jobs, personal income and state revenue. The largest number of filings were in Shelby County, followed by Davidson, Knox and Hamilton counties. These four most populous counties accounted for 48.9 percent of new filings state-wide.

Tennessee’s June unemployment rate (4.9 percent) continued to decline from its pandemic high of 15.8 percent and remains below the national rate of 5.4 percent. In June, employment in Tennessee grew by 22,100 jobs, but total employment remained below the pre-pandemic peak in February 2020.

“To see more than 60% growth in new entity filings over the past year is just staggering,” Boyd Center director Bill Fox said. “Though the COVID-19 pandemic surely played a role in this huge increase, almost 20,000 new business filings really show just how business-friendly Tennessee is. The state is recovering from the pandemic-induced recession and should see strong economic growth in the quarters to come.”

This report provides a snapshot of the state’s economy based on key indicators, including new business data from the Secretary of State’s Division of Business Services. It is published through a partnership with the University of Tennessee Knoxville’s Boyd Center for Business and Economic Research and the Secretary of State.

To review the complete Q2 2021 Tennessee Quarterly Business and Economic Indicators report, past reports and a teleconference recording about the report with Secretary Hargett and Dr. Fox visit, sos.tn.gov.