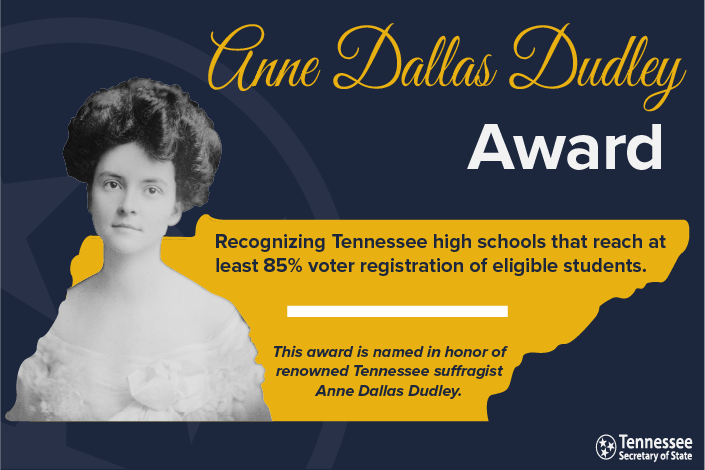 “Our state and our nation are stronger when every eligible Tennessean is registered to vote and casts a ballot on Election Day,” said Secretary of State Tre Hargett. “We are working with county election commissions across our great state to make sure students know that it has never been easier to register to vote in Tennessee and to encourage them to make their voices heard by going to the polls on Election Day.”

Anne Dallas Dudley helped lead the successful effort to get the 19th Amendment to the U.S. Constitution ratified nationwide and in her home state, Tennessee. On Aug. 18, 1920, Tennessee became the 36th and final state needed to pass the amendment giving women the right to vote.

“It is an honor to have a voter registration award named after my grandmother, Anne Dallas Dudley,” said Trevania Dudley Henderson, Mrs. Dudley’s granddaughter. “Hopefully this award encourages all eligible students across Tennessee to register to vote.”

The Anne Dallas Dudley Award is part of the Secretary of State’s civics engagement initiative to promote voter registration to Tennessee students and prepare them to be actively engaged citizens. For more information about this award and our other civic engagement education efforts, visit sos.tn.gov/civics.