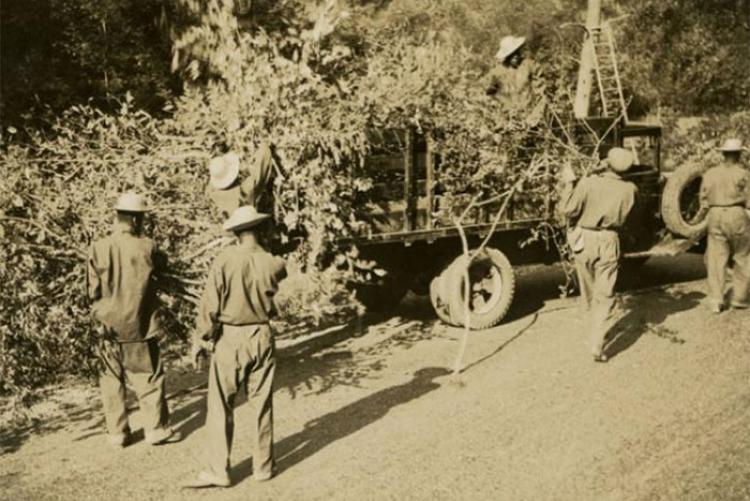 The Tennessee State Library and Archives maintains a diverse collection of resources that relate to African American genealogical research. Although there were free blacks in the state, the majority of Tennessee's African American population were slaves, making them virtually invisible because of the scarcity of documentation in antebellum records. The information in this guide is by no means exhaustive. Researchers are urged to confer with librarians and archivists at the Library and Archives for consultation on individual research needs.

Federal Censuses (1820-1930)
Prior to 1870, only free blacks appear on the census. The 1870 census was the first federal census to record all black households, including former slaves.
Slave schedules, also called "slave censuses" were prepared in conjunction with the 1850 and 1860 population censuses. These censuses record the owners' names, but the slaves are represented only by gender, age, and color (black or mulatto) with the exception of the 1850 census of Scott County, Tennessee, District 19, which did list slave names. The Federal Census Mortality Schedules of 1850, 1860 and 1880 indicate name, race, whether free or slave, birth place, month of death, trade and cause of death.

State and County Records (Wills, deeds, court minutes, marriages, etc.)
Free blacks sometimes appear in these records prior to the Civil War. Slaves are often mentioned by name in deeds, wills, and other court transactions involving the transfer of property from one person to another. Manumission records appear in the circuit court minutes.

Civil War Colored Confederate Pension Applications
On April 9, 1921, the Tennessee legislature passed an act providing pensions of $10 per month for “those colored men who served as servants and cooks in the Confederate Army in the War Between the States.” This Act did not provide any benefits for their widows. An applicant was required to give the state, county and year of his birth as well as the date on which he entered service, his former owner's name, regiment, and commanding officer. Sometimes records include letters of testimony written by the former owner or one of his family members as proof of the applicant's service.

Employment Rolls and Nonpayment Rolls of Negroes Employed in the Defense of Nashville, Tennessee, 1862-1869. Mf. 1797 and Mf. 1910 .
These rolls primarily represent employment records of free blacks and slaves who were hired or impressed into the Union Army to work as laborers on fortifications of Tennessee. Also included are a few payrolls from Alabama. An index to the names on the employment rolls is available on the Library and Archives web site.

W. R. Cornelius and Co. Burial Records of Federal Soldiers, Nashville, 1864-1865. Mf. 1510
The Cornelius company had the contract to bury Union Army dead, including black military laborers. The records, which are arranged by date, contains the soldier's company, regiment, date of interment, cause of death, and hospital or other location from which the soldier came.

Index to Compiled Service Records of Volunteer Union Soldiers Who served with U. S. Colored Troops. Mf. 1454
This index gives the soldier's name, rank, company, and the unit in which he served.

Compiled Military Service Records of Volunteer Union Soldiers Who Served with the United States Colored Troops, 12th United States Colored Infantry. Mf. 1742
The 12th USCT was organized at Elk Bridge and Nashville, Tennessee, in August 1863. On December 15 and 16, 1864, the regiment participated in the Battle of Nashville and the pursuit of General John Bell Hood's army to Decatur, Alabama. Following this expedition, the 12th USCT guarded the Nashville and Northwestern Railroad against guerilla attacks until it mustered out in January 1866.

Records of the Memphis Sub-District of the Bureau of Refugees, Freedmen, and Abandoned Lands, 1862-1872. Mf. 1708
These records reflect the War Department's focus on property disposition and assisting the freedmen. The agency was also concerned with aiding veterans of the United States Colored Troops in collecting pension and bounty payments.

Freedmen's Savings & Trust Company, Index to Deposit Ledgers, 1865-1874. Mf. 1379
This is an index to bank deposit ledgers of the Freedmen's Savings and Trust Company branches located throughout the South and in some Northern states. Of particular interest are the records of the Memphis and Nashville banks in Tennessee. The index is arranged alphabetically and includes the depositors' names and account numbers.

Selected Records of the Tennessee Field Office of the Bureau of Refugees, Freedmen, and Abandoned Lands, 1865-1872. Mf. 32
These records consist of correspondence, reports, orders, complaints, leases for abandoned lands, and labor contracts. The correspondence, which is primarily between Bureau field agents in different counties in Middle and West Tennessee, often concerns the problems confronting the freedmen in these parts of the state.

Records of the Superintendent of Education for the State of Tennessee, Bureau of Refugees, Freedmen, and Abandoned Lands, 1865-1870. Mf. 1038
Consists primarily of endorsements and correspondence with various aid societies, teachers, and district superintendents. Many of the letters concern routine matters such as salaries and school maintenance, but some were written by teachers asking for more protection or by freedmen asking for help in establishing new schools.

Some of the family papers housed in the Tennessee State Library and Archives include bills of sale, slave deeds, wills, and other records pertaining to slaves that the family owned. For example:

For additional information on family papers, researchers should contact the Manuscripts Section.

African-American Newspapers
Newspapers addressing the concerns of the black community were published in Nashville, Knoxville, Chattanooga and Memphis. A list of the microfilm holdings in the Library and Archives' collection is found in the Guide to Tennessee Newspapers online.

School Censuses
Most of these records were created in the mid-1940s, and are not available for all counties. A list of the available school censuses is found on Library and Archives website.

It can also be helpful for African Americans to research the genealogy of a slaveholder’s family to learn more about their own ancestors and to discover their ancestor’s migration path to Tennessee.

Acts of Tennessee Names Index. This index is divided into two parts and covers the first 50 volumes of the published Acts: 1796-1830 and 1831-1850. The index includes names of slaves and people of color (no last name given).

African American community histories have been published for Davidson, Franklin, Giles, Hawkins, Henry, Lincoln, Rutherford, and Williamson Counties as well as the cities of Nashville and Knoxville. There are published indexes of births in Wilson County and indexes to the marriage records of Madison and Rhea Counties. There are a number of cemetery surveys published from various counties across Tennessee.

The USF Africana Heritage Project   (University of South Florida) whose mission it is to rediscover precious records that document the names and lives of former slaves, freed persons and their descendants, and share those records on this free Internet site.

WPA Slave Narratives   This Library of Congress - American Memory represents the efforts of the Federal Writers' Project of the Works Progress Administration (WPA) to interview surviving ex-slaves during the 1930s. The result of these efforts was the Slave Narrative Collection, a group of autobiographical accounts of former slaves compiled in seventeen states during the years 1936-38.

Freedmen's Bureau Online   The Bureau of Refugees, Freedmen, and Abandoned Lands, often referred to as the Freedmen’s Bureau, was established in the War Department by an act in 1865. The bureau was to address all matters concerning refugees and freedmen within the states that were under reconstruction.