"Gloriously Fighting a Glorious Cause": Tennesseans in the War with Mexico, 1846-1848 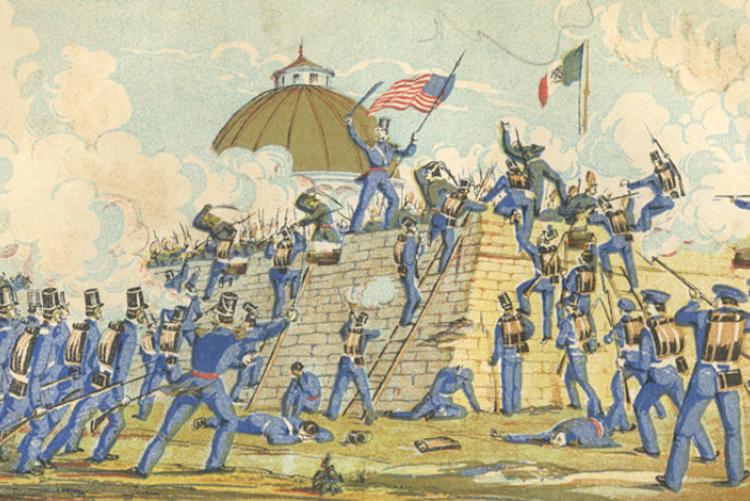 Pictorial History of Mexico and the Mexican War

Fueled by patriotism and faith in Manifest Destiny, the American public was in an expansionist mood in the early 19th century. Tennessean James K. Polk, elected president in 1844 on a campaign pledge to annex Texas and Oregon, moved promptly to fulfill that promise. Both territories soon won statehood in the "Glorious Constellation" known as the United States of America.

Tennesseans flocked to Texas during the 1820s and 1830s to settle territory freshly opened by Mexico. Famous sons like Sam Houston and David Crockett were among the thousands "Gone to Texas." Most Southerners bound for the new Promised Land sought to escape economic hardship, and cheap land—four cents per acre—quickly drew them. The Revolution of 1836, brought on by an increasingly dictatorial Mexico, resulted in the birth of a new independent nation: the Republic of Texas. Most Texans favored immediate annexation by the United States.

During the next decade, relations between Mexico and the US went sour. At the time war broke out in 1846, American troop strength was too low to even consider fielding a foreign occupation force. When the secretary of war issued a call for 2,800 Tennesseans to join the ranks, 30,000 responded! This cinched the nickname "Volunteer State‖ earned during the War of 1812.

The First and Second volunteer infantries were raised in Middle and West Tennessee respectively, and a regiment of cavalry came from East Tennessee. All served in battle with distinction. The Third, Fourth and Fifth infantries were recruited after the main fighting ended. Sickness wracked the regiments throughout the war. Measles, mumps, smallpox, typhoid, and diarrhea claimed more lives than combat wounds.

Most Tennesseans enthusiastically supported the war. Place names like Trousdale County, Fort Campbell, Buena Vista, Cerro Gordo, and Monterey in our state are associated with heroes or battles of the Mexican War. Under the terms of the Treaty of Guadalupe-Hidalgo, Mexico ceded 50% of its territory to the U.S. and relinquished all claims to Texas.

The Tennessee State Library and Archives has a variety of materials from this period: letters, diaries, family papers, muster rolls, scrapbooks, maps, and period books among them.

Papers. Duffy Family, 1794-1936. Of special interest are letters from Patrick and Tom Duffy, soldiers of the First Tennessee Infantry Regiment. They give detailed descriptions of battles and camp life. The Duffys were from Sumner County. (Photocopies) X-B-1. Ac. No. 90-370, 90-371.

Papers. Polk Memorial Association, 1780-1972. The letters in this collection are historically significant. Discussed are various aspects of the war: its prosecution, diplomacy, relations with Mexico, soldiers’ experiences, and rumors of Santa Anna’s troop movements. Other subjects include Murfreesboro volunteers, war resolutions, and comparison of social events in Washington and Murfreesboro. Especially charming are the comments by the Rucker sisters, who are described as "vivacious Southern belles." I-J-3 and I-J-5. Ac. No. 1971-228, 1977-013. Microfilm #805.

Papers. William B. Walton, 1818-1949. Walton was a hero of the Mexican War. The collection includes correspondence, rosters of units, clippings, genealogical data, and a minute book of the Tennessee Association of Mexican War Veterans. I-H-7. Ac. No. 264. Microfilm #1220.

Diary. Washington Curran Whitthorne, 1845-1846. From Maury County, Whitthorne was U.S. Senate Clerk during the war. His diary is important for its political insight during the early Polk administration. Relations with Great Britain over the fight for Oregon are a major issue. Comments on corrupt politicians, Mexico, patriotism, "Uncle Sam," dark rumors circulating in Washington, and matters of the heart round out this journal. THS I-E-2. Ac. No. THS

Diary, 1846-1847. This detailed journal, published in a period newspaper, describes major fighting in Mexico. It includes lists of officers who served with national hero Gen. Winfield Scott. I-J-2. Ac. No. 67-92

Letter, 1846. Tucker-Vaughn Papers. Of historical value are letters written by William Tucker, father of William Benjamin Tucker, while the latter was serving with Tennessee volunteers in the Mexican War in 1846. He describes in some detail the successful storming of forts guarding the approaches to Monterey and the subsequent capture of the city. XVII-A-5. Box 1-35. Ac. No.1993.109. Microfilm #1431

Letter, 1847. Thomas Love. Written from Buena Vista, this letter gives an account of a speech made there by Col. Jefferson Davis. Love is highly critical of Davis, calling him "arrogant" and "unfit." Contains comments on the common soldier and a vivid description of the Battle of Monterey. "The Mississippi and Tennessee volunteers done all the fighting…." I-J-2. Ac. No. 1346

Letter, 1847. Adolphus Heiman. Writing to the mother of a soldier, the Nashville architect notes Gen. Pillow’s arrest of her son, Robert. The young man cut loose another soldier Pillow ordered tied to a wagon. I-J-2. Ac. No. 1268

Letters, 1846. George Henry Nixon. One of three letters describes the charge of Lawrence County men at the Battle of Monterey and includes a list of casualties. "I was the first man on the rampart," Nixon wrote, before he tells of killing an enemy soldier loading a canon. I-J-2. Ac. Nos. 303 & 901

Card Files. Tennesseans in the Mexican War. These are filed alphabetically by surname and include place of enlistment, rank, company, regiment, brigade, and remarks.

Furber, George C. The Twelve Months Volunteer, or, Journal of a Private in the Tennessee Regiment of Cavalry . . . in Mexico. Cincinnati: J.A. & U.P. James, 1848. E404 .F97. This illustrated recollection of major battles contains a tribute to the First and Second Tennessee.

Robertson, John Blount. Reminiscences of a Campaign in Mexico by a Member of the "Bloody-First." Nashville: J. York & Co., 1849. E411 .R64. This is the life of a soldier in the First Tennessee Infantry which earned its nickname at the Battle of Monterey.

Rowles, W.P. The Life and Character of Capt. Wm. B. Allen, of Lawrence County, Tenn., Who Fell at the Storming of Monterey…. Columbia, TN: J.J. M’ Daniel, Democratic Herald book office, 1853. F436 .A4R8. Allen was felled leading a charge and died exhorting his company of Lawrence Blues to storm the fort.

Index to Compiled Service Records of Volunteers Who Served during the Mexican War. 41 reels. National Archives M616. Index is arranged alphabetically by soldier’s surname and includes company, regiment, and rank.

Compiled Service Records of Volunteer Soldiers Who Served during the Mexican War in Organizations from the State of Tennessee. 15 reels. National Archives M638. Usually gives muster roll details. Records are organized by regiment and company then arranged alphabetically by soldier’s surname.

Microfilm #1861. Index to Pension Application Files of Remarried Widows Based on Service in the War of 1812, Indian Wars, Mexican War, and Regular Army before 1861. 1 reel. National Archives M1784.