Korean War Resources at the Tennessee State Library and Archives 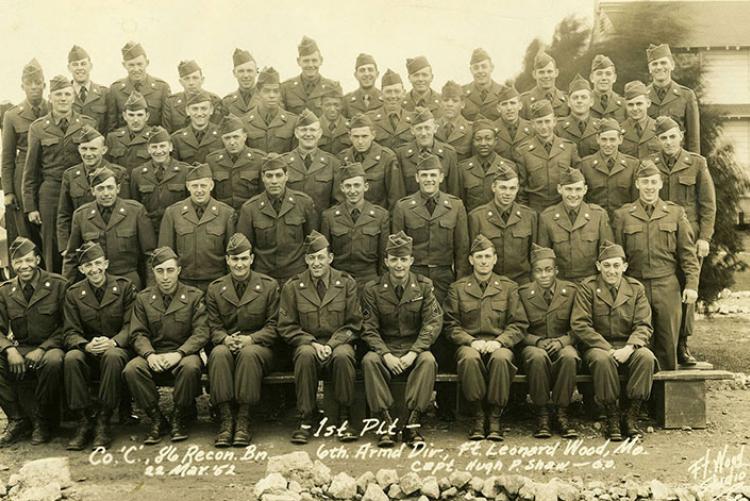 An estimated 10,500 Tennesseans served in the Korean War. At this time, service records for the Korean War are held by the federal government at the National Personnel Records Center in St. Louis.

The Tennessee State Library and Archives holds a number of manuscript collections, record groups and published materials on the Korean War. Patrons researching Tennessee's involvement in the war may wish to review the materials listed below or e-mail our Reference Department with questions. The reference staff will respond to e-mail requests promptly; response time may vary, depending on the amount of research required to answer your question and the unique nature of your request. If you need immediate assistance you may call the reference desk at (615) 741-2764 or visit us in person.

At the end of the Second World War, Korea, which had been ruled by Japan since 1910, was divided between the United States and Soviet Russia along the 38th Parallel. In 1948 the North established a Communist government, and tensions on the peninsula escalated, resulting in minor armed engagements along the border. Although negotiations for reunification were ongoing, war broke out on June 25, 1950, when North Korean forces invaded the South. To repel the attack, the United States and ten countries representing the United Nations rushed to the aid of the South Korean forces, comprising the first world army under the unified command of General Douglas MacArthur. By early September, the North Koreans had captured the South Korean capital of Seoul, and had pushed the allies back to a defensive perimeter around the port of Pusan.

On September 15, after a build-up of American and allied forces, General MacArthur executed a counter-attack against the North with an amphibious landing on the west coast at Inchon Harbor near Seoul. At the same time the troops in the Pusan rectangle moved north and South Korean troops landed on the east coast and marched inland. The surprise attack so devastated the enemy that their resistance collapsed and their armies fled. Seoul was recaptured on the 26th and South Korean and UN troops not only pushed the Communists back across the 38th Parallel, but moved rapidly forward capturing the North Korean capital of Pyongyang, and by late October they had advanced deep into the North.

The allied thrust, however, occasioned the Chinese Communists to come to the aid of the North Koreans. Despite an offensive by the American Eighth Army on November 24, by the end of 1950 the overwhelming Chinese forces had driven the allies back to a defensive position between Seoul and the 38th Parallel. Fierce fighting characterized the winter and spring of 1951, and although the allied forces eventually gained the upper hand, by the first anniversary of the war the conflict had become a stalemate.

One of the most controversial incidents of the war was President Truman’s firing of General MacArthur. In an effort to bring the Korean conflict to a swift end, MacArthur favored an all-out war with Communist China. Truman believed that such a course would bring the Soviets into the war on the side of the Chinese, precipitating a Third World War, and rejected MacArthur’s plan. MacArthur continued to publicly disagree with Truman’s goal of fighting a limited war, and on April 11, 1951, he was relieved and was replaced by General Matthew Ridgway as commander of all UN forces.

Armistice discussions began in July at Panmunjom although intermittent fighting continued to drag on for another two years. The bloody conflict came to an end on June 27, 1953, when a truce was finally signed. It is estimated that 10,500 Tennesseans served in the Korean War.

Laura Irene McKinney Collection, 1807-1972.
This is a collection of records of Laura Irene McKinney (1902-1984), genealogist and resident of Etowah; her father, Samuel Walker McKinney (1878-1954), businessman and alcohol tax investigator; and her brother, Colonel Harry Ellery McKinney (1904-1978), career Army officer. Harry E. McKinney served as regimental commander in Korea, 1951-52, and describes some of the intense fighting that soldiers under his command experienced. The register includes a name index to correspondence. 2,000 items. Mf. 958.

Edyth Rucker Whitley Scrapbook Collection, 1916-1917, 1940-1945, 1953
The Edythe Rucker Whitley Scrapbook Collection, consisting of 531 items, spans the periods of 1916- 1917, 1940-1945, and 1953. The collection consists of newspaper clippings, the majority of which relate to World War II. These clippings concern Tennesseans who were inducted into military service, their promotions and transfers, casualty lists, and those killed or missing in action. In addition to clippings of World War II, there are news items relating to World War I and the Korean War. Accession No.: 93-030; Mf. 1400.

Secretary of State, Division of Elections
Military Absentee Ballots, 1944-1962
Record Group 125
Consists of one hundred and four volumes of registers. All counties of the state are listed by volume and each volume is indexed.

Department of the Military
National Guard Enlistment Records, 1890-1967
Record Group 203
This collection consists of nine volumes of enlistment records of members in the National Guard, State of Tennessee. The collection is arranged chronologically and is left in the original order. The first five volumes in the collection are in alphabetical order within the listed time frames. The final four volumes are arranged in alphabetical and chronological order by year of enlistment. The volumes list names, but provide no detailed information.

Ridgway, Matthew B. The Korean War: How We Met the Challenge: How All-Out Asian War was Averted: Why MacArthur was Dismissed: Why Today’s War Objectives Must be Limited. Garden City, NY: Doubleday, 1967. DW918 .R49