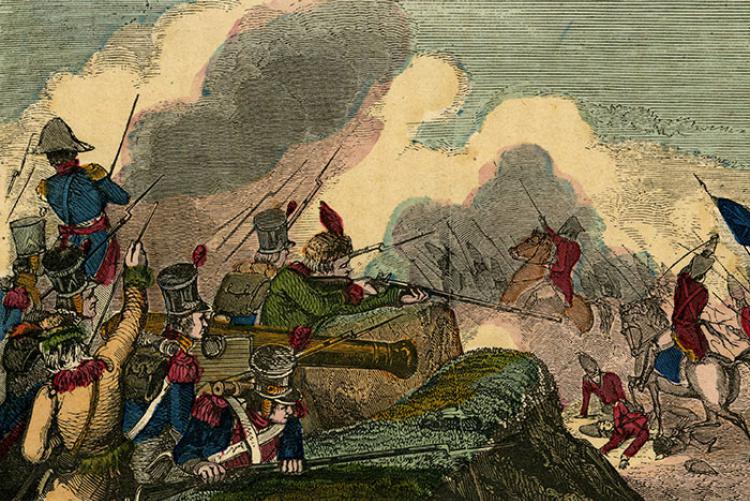 The War of 1812 has been referred to by some historians as America’s “forgotten conflict.” The contest between the United States and Great Britain, fought in the years 1812-1815, is mired in controversy in terms of causation and results. The reasons for going to war with England were ostensibly over the rights of free trade and impressment of American sailors. Other elements include American territorial expansion, economic factors, and national honor. The war has been criticized as one in which neither side won and, therefore, should never have been fought. Yet the war did manage to bring some prestige to the young American nation as it demonstrated to the world it could stand up against one of the world’s mightiest military powers.

For Tennessee, the War of 1812 proved to be a watershed moment. It was Tennessee that took the lead in first declaring the war—through the political machinations of Felix Grundy, a war hawk in Congress—and then through the military leadership of Andrew Jackson who commanded the Tennessee militia and, later, the regular army forces in the Southeast. Indeed, it is Andrew Jackson who most personifies Tennessee in the War of 1812, as his brilliant defensive victory at New Orleans in January 1815 eventually propelled him to the White House in 1828.

For the thousands of Tennesseans who participated in the War of 1812, it was in the Creek War of 1813-1814 that they actually saw service. The Creek Indians, living in what is now Georgia and Alabama, were considered allies to Great Britain. When hostilities broke out within the Creek nation, it was Tennessee that took advantage of the explosive situation and with overwhelming numbers quelled the feeble resistance of the Creeks. Jackson then demanded huge land concessions as reparations for the Creek War. As a result, large tracts of land were opened to white settlement and the long road toward Indian removal in the Southeast began.

Unfortunately, the Tennessee State Library and Archives does not possess the individual service records and pension files of Tennesseans in the War of 1812; they are housed at the National Archives (Washington, D.C.). However, the Library and Archives does possess microfilm, printed material, and fine manuscript collections pertaining to the War of 1812. Here are some of our holdings:

Papers of Andrew Jackson
74 reels. Library of Congress. TSLA Mf. #30
The most complete set of Jackson correspondence available, this collection is divided into six series. The material pertaining to the War of 1812 is located in the Fifth Series, “Military Papers,” reels 65-68.

Papers of Andrew Jackson
39 reels. Scholarly Resources, Inc. TSLA Mf. #30a
Similar to but not as complete as the Library of Congress collection. The period of the War of 1812 can be found on reels 2-4.

Index to Compiled Service Records of Volunteer Soldiers Who Served During the War of 1812
234 reels. National Archives M602. TSLA Mf. #976
Consists of general index cards denoting name, rank, regiment, state, and is arranged alphabetically by soldier’s surname. The advantage of this index is that it includes all the states that participated in the war. See also: published rosters of soldiers from various states in TSLA library holdings.

War of 1812 Index to Pension Applications, 1871-1878
102 reels. National Archives M313. TSLA Mf. #938
Applications are arranged alphabetically by veteran’s surname. Includes pension claim or file number, name of soldier or widow, marriage date, maiden name of wife, place of residence, place and date of death, and other identifying information. It should be noted that many of the entries are not as complete in detail as others. In most cases, just the name, rank, regiment, and file number are given. This index was probably the source for Virgil White’s published index of pension files. See: Index to War of 1812 Pension Files (White, 1989) E359.4 W44.

War of 1812 Military Bounty Land Warrants, 1815-1858
14 reels. National Archives M848. TSLA Mf. #1030
Despite the title of this record group, the material contained on the reels refers to bounty land warrants under the U. S. acts of 1812 and 1814. These acts focused only on noncommissioned officers and soldiers serving in the U. S. Regular Army, not the militia. As a result, the information in this group does not pertain to very many Tennesseans — most of whom served in the volunteers or militia. It was not until the 1850s that militia and volunteers were eligible for bounty lands.

Register of Enlistments in the United States Army, 1798-1914
81 reels. National Archives M233. TSLA Mf. #1416
Registers of soldiers who served in the U. S. Regular Army (as opposed to state militia). Information can include (but not always): name, rank, regiment, company commander, physical description, age and occupation, when and where born, enlistment date and by whom, period of enlistment, and other remarks. The register is helpful for researchers who cannot find a soldier on the militia muster rolls but feel certain the man served in the War of 1812. Reels 1-13 pertain to the period 1798-1815.

War of 1812 Muster Rolls—Tennessee Militia and Volunteers
2 reels. TSLA Mf. 1459
Microfilmed copies of the photostats obtained from the National Archives. They consist of muster and pay rolls of the various Tennessee units of militia and volunteers that participated in the War of 1812. The rolls are lists of men in a captain’s company and provide name, rank, enlistment/discharge dates, rate of pay, and some miscellaneous remarks (for example: “left sick at Ft. Strother” or “Wounded in battle Nov. 9”). It should be noted that many of the original rolls are in poor condition and, in many cases, make poor copies.

War of 1812 Index of Tennessee Officers and Soldiers
6 reels. Adjutant General Records, State of Tennessee. TSLA Mf. #1460
Consists of index cards alphabetically arranged by the soldier’s surname. Includes rank, regimental designation, company commander, and regimental commander. The information on these cards was supposedly taken from the muster rolls and used in the compilation of Sistler’s index. See: Tennesseans in the War of 1812 (Sistler and Sistler, 1992).

The Library and Archives possesses an array of general histories pertaining to the War of 1812 as well as information found in the many county history books available in our Library. Some of the more important printed material for historians and genealogists include:

The Manuscripts section at the Library and Archives houses a number of diaries and important correspondence related to the War of 1812. In addition to several collections of Andrew Jackson materials, one main collection is the John Coffee Papers—Dyas Collection. Coffee (1772-1833) was Jackson’s friend and military subordinate who served in all the campaigns of the war. Consult the Manuscripts online guide for further manuscript materials of the War of 1812:   Manuscript Materials on Microfilm and Manuscript Collection Finding Aids (A - H,  I - P and Q - Z).

War of 1812 related materials on the Library and Archives website

“Regimental Histories of Tennessee Units During the War of 1812.”