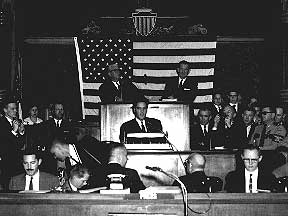 Tennessee’s legislative branch of government is dominated by a bicameral General Assembly consisting of both a Senate and House of Representatives. This structure has existed since the Assembly’s first meeting in Knoxville in the winter of 1796. (The Territorial General Assembly of Tennessee met during 1794 - 1795.) Members of the General Assembly, or Legislature, are elected by popular vote from communities all over the state. Legislators are part-time lawmakers who, coming from each district, know the problems and aspirations of the people of those districts. The Constitution of the state specifies the size of the Assembly by mandating ninety-nine members for the House and providing that Senate membership not exceed one-third of the House membership. The Senate, therefore, has thirty-three members. Of the other forty-eight bicameral state assemblies (Nebraska is the only state with a unicameral legislature), representation may vary from between 20-67 senators and 40-400 representatives.

Listings of members of Tennessee Senate can be also found in the Senate Archives section of the Tennessee General Assembly web site.

You may visit the Ask Us a Question! web page to send us an e-mail for information on past and current members of the Tennessee House of Representatives. The Library and Archives will respond to e-mail requests promptly; response time may vary, depending on the amount of research required to answer your question and the unique nature of your request. If you need immediate assistance you may call the reference desk at (615) 741-2764 or visit us in person.