Searching for Your Ancestors at the Tennessee State Library and Archives 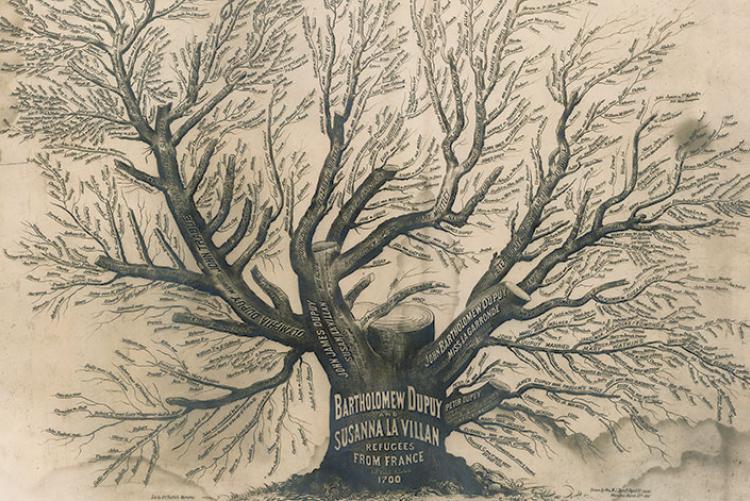 image of a hand-drawn family tree

Genealogy is the record of a family’s history. In many cases, our ancestors left a “paper trail” for us to follow. Genealogy is a very personal way to study history which can lead to many exciting discoveries.

* Start with what you already have
Look for resources within the family that may give additional information. Items such as newspaper obituaries, memorial cards from funerals, family Bibles, photographs, letters, property deeds, military discharge papers, baby books and marriage licenses can provide important information for the next steps in your research.

* Interview family members
An excellent way to complete parts of your pedigree chart as well as gather great stories about your family is to interview parents, grandparents and other relatives. Record the recollections of older family members about events such as births, deaths, burials, occupations, health issues, talents, names (nicknames, middle names and maiden names), legends and events. Remember to ask open-ended questions (those that can’t be answered with a simple yes or no).

* Keep careful records/Be consistent
Always try to find primary sources. Indexers, authors and abstracters will make mistakes. Whenever possible, look at original death certificates, marriage records, wills and other documents, or copies of them on microfilm. Make photocopies of the documents. Always record your sources–the title, date and page of the document and the repository where the record can be found (Example: Coffee County, TN Deed Bk. 2, p. 471. TSLA).

Use maiden names for women, and record dates with day of the month first, followed by month and then year using four digits (Example: 1 Jan 1761).

Use standard abbreviations such as b for born, m for married, d for died.

Making Use of Records
Census Records – Tennessee became a state in 1796. The territorial census schedules and the 1800 census were lost or destroyed. The 1810 census of Tennessee was also lost, except for Grainger and Rutherford counties; the censuses for both of these counties have been indexed.
There is also a published work comprising an 1810 “Reconstructed Census.” The 1820 census is incomplete, and most East Tennessee counties are missing. Beginning with the 1850 census, all members of a household were identified by name, age and the state of birth. Tennessee did not take any state censuses; however, U. S. censuses are available every ten years from 1830 to 1930, with the exception of the 1890 census, which was destroyed in a fire. The 1940 census will be opened to the public after seventy-two years (2012).
Tennessee census records are available either on microfilm or via our in-house computer database subscriptions to Ancestry library edition or HeritageQuest.

Mortality Schedules – Part of the U.S. Federal Censuses from 1850-1880 included a mortality schedule enumerating the individuals who had died in the previous year. Because each of the censuses from 1850-1880 began on June 1, "previous year" refers to the 12 months preceding June 1, or June 1 (of the previous year) to May 31 (of the census year). These records usually have the deceased person's name, age, sex, race, month of death, cause of death and sometimes other details, such as the attending physician. There are Mortality Schedules for Tennessee from 1850 through 1880.

1891 Enumeration of Male Voters – This is a list of the male voters in each county in 1891. Some of these voter lists include age and race but no other personal or family information is provided. Not all have been indexed.

Slave Census Schedules – Although free African Americans were enumerated by name in the 1850 and 1860 census, slaves were not. However, when the census taker traveled the county to gather census data on free persons, he also gathered information from anyone who held slaves, including the number held and number of slave houses, and for each slave, the age, sex, color and some other information, but not the names of the slaves.

The principal genealogical events are births, marriages, and deaths. As a state, Tennessee did not begin collecting birth and death records until 1908. The law lapsed in 1913, but it was reinstated in 1914. By state law, birth records are confidential for one hundred years, death records for fifty years. There are exceptions: namely, the largest cities and some counties in Tennessee kept earlier records. Birth records may include the name of the child, date of birth, names and birthplaces of parents, their occupations and place of residence. Death records may include the name of deceased, date and place of death, age at the time of death, cause of death, occupation, name of spouse and, beginning in 1914, name and birthplace of parents, along with the date and place of burial. Reliable information on a death certificate is dependent upon how much firsthand knowledge the informant or next-of-kin knew about the deceased. A newspaper obituary is also a good place to look for clues.

Tennessee marriages were recorded in each county. Early marriage records often included only the name of the bride and groom on the license and/or marriage bond. Marriage licenses recorded in the 1900s usually contain more family information.

The Civil War and other events resulted in the destruction of many county courthouses and records have been lost. The State Library and Archives has microfilmed the majority of the extant county records. Documents that may be found in county records include probate records; chancery, civil, circuit, criminal and county court records; marriage and divorce records before July 1945 (at which time they became state records and have a statewide index); land records; school board minutes; tax books and military discharges.

Probate Records – The term “probate” refers to the process by which the estate of a deceased person is settled. Estate papers can usually be found for the deceased unless he left nothing of value, or else all real or personal property had been transferred to the heirs before death. These papers will be filed where the person was living at the time of death. Papers may include original wills, inventories, sales of personal estates, administrator’s bonds and accounts and guardian bonds and settlements.

Court Records – Probate records normally would have been under the jurisdiction of the county court, but if an estate was contested, the case could be filed in either the chancery or circuit court. Chancery courts have jurisdiction over property disputes; circuit courts oversee criminal cases, divorces and adoptions. Early courts included courts of common pleas and quarter sessions.

Land Records – A deed is the most important type of local land record, as it conveys property from one person (seller or grantor) to another (buyer or grantee), usually for monetary consideration. A land record places an ancestor at a particular place in time. If a deed was the first purchase made in a locality, it may mention a person’s previous place of residence. Deeds were usually registered in the local county deed book; however, no law required this. County tax lists can indicate ownership of land or whether a person is only paying a poll (head) tax. The abrupt absence of a person on a tax list can indicate he has either died or relocated. Land grants from the state government can also be found in county deed books.

The World War I questionnaire project was part of an effort to gather and preserve the history of Tennessee's involvement in what was then known as “the Great War.” Besides the questionnaires, Gold Star records were compiled during the 1920s and consist of information from families on soldiers who died during World War I.

The Tennessee State Library and Archives is the official repository for records of the State of Tennessee. These Record Groups consist of various types and formats of records created by agencies in the performance of their duties. Examples of some Record Groups that can assist researching your ancestor are:

Acts of Tennessee: From the time Tennessee was a territory of the United States (1790 - 1796), its legislature has passed laws affecting the lives of its citizens. From acts legitimizing children to those granting divorces, from authorizing turnpikes and ferries to compensating a citizen for services rendered, the legislature has touched the lives of citizens in thousands of ways in its 200-plus years. (Please see the document Acts of Tennessee 1796 - 1850 : Index to Names.)

The vast collection of newspaper microfilm housed in the Microfilm Reading Room includes almost every extant newspaper published in Tennessee. Newspapers can be very helpful in finding obituaries and birth and marriage announcements. (Please see the document Newspapers on Microfilm at the Tennessee State Library and Archives.)