Tennessee in the Great War, 1914 - 1918: A Guide to Collections at the Tennessee State Library and Archives 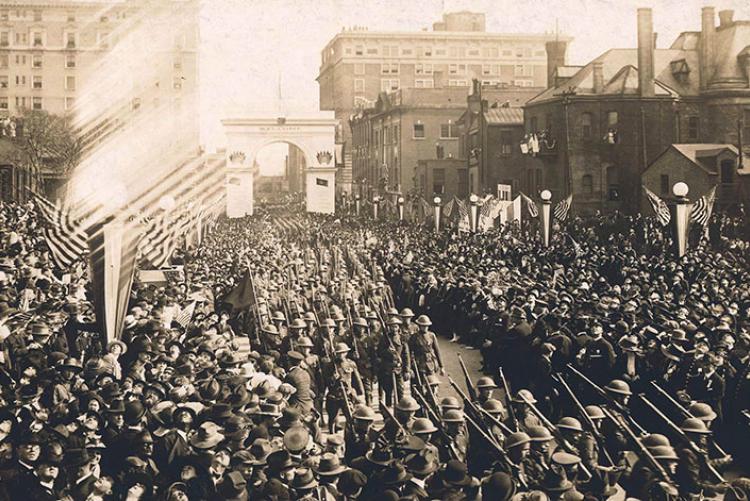 World War I, the “War to End All Wars,” was a bloody conflict of immense proportions. As we know, it certainly did not end war. European hostilities had broken out in 1914 when two alliances failed to reach diplomatic solutions to complex problems. In 1916, President Woodrow Wilson campaigned for reelection on the slogan “He kept us out of war.” However, in 1917, Wilson convinced Congress to declare war on Germany after a series of outrages against the United States. The Allied Powers (Great Britain, France and Russia), were pitted against the Central Powers (Germany, Austria-Hungary and Turkey) in a struggle that would radically alter the map and sow the seeds of another world war. With a few notable exceptions, the fiercest fighting took place in France and tiny Belgium. The Atlantic Ocean became a battleground because of unrestricted submarine warfare, and theaters of war operated in the Middle East and the Balkans.

American troops, or “doughboys,” began arriving in France in 1917, though they did not participate in major action until 1918. The American public followed the campaigns enthusiastically especially in newspapers and letters from the front. General John J. Pershing commanded the American Expeditionary Forces (AEF), at its largest consisting of 4 million troops, some 2 million of them overseas. Over 100,000 Tennesseans volunteered or were drafted during the First World War, six of them winning the Medal of Honor. Alvin C. York of the 82nd Infantry was perhaps the war’s greatest common soldier. Of humble origins from Fentress County, York won his Medal of Honor for heroism in the Argonne Forest. He was cited for killing 28 German soldiers and capturing 132 prisoners. France presented him with its Croix de Guerre.

The armistice of 11 November 1918 ended the shooting, but it was not until 1919 that the Treaty of Versailles formally ended the war. The United States never ratified the treaty. Tennessee troops returned as heroes to grand homecomings all across the state.

The Tennessee State Library and Archives' collections are unique in that so many papers are interrelated, especially those involving the 30th Infantry, known as the “Old Hickory Division.” The collections bear great significance for scholars and students of World War I especially those researching Tennessee’s contributions. Tennesseans served with distinction at St. Mihiel, the Meuse-Argonne offensive, the Somme, and the Battle for the Hindenburg Line. Below are some of the Library and Archives’ major holdings.

* The Luke Lea Papers are the Library and Archives’ premier WWI collection filled with scrapbooks, photographs, maps, and letters. Lea was commander of the 114th Field Artillery (FA), the only fully-volunteer regiment in the 30th Division. There is a colorful description of Lea’s daring plan to capture the Kaiser who had fled to Holland. The photographs provide visual documentation of the service of the 114th FA and the Nashville homecoming of 1919. Microfilm 1541

* The Thomas F.P. Henderson Papers--Addition portray the wartime activities of a Williamson County captain in the 114th Field Artillery who served with Luke Lea. Of special historical value are the photographs which chronicle the regiment’s arrival in France and its gritty war on the Western Front. Microfilm 1357

* The Frierson-Warfield Papers provide wartime accounts of two Maury County men, Major Horace Frierson (114th FA) and Captain Francis B. Warfield (105th Engineers) of the 30th (Old Hickory) Division. Frierson’s journal is of unique interest as well as the photographs collected by both men. The images depict modern weaponry and the wretched conditions of trench warfare on the Western Front. Some very fine examples of U.S. Army Signal Corps photos are included.

* Ray Wallace Billington Papers. In 1917, Dr. R.W. Billington volunteered for service in the U. S. Army Medical Corps and went overseas with a group of orthopedic surgeons who were loaned by the U. S. Government to the British for performing special reconstructive surgery. Microfilm 1232

* The Ellsworth Brown Papers contain letters written and photographs taken by the Signal Officer of HQ Co., 114th FA. Importantly, the papers also include the diary of David Fryar McGinnis, 114th FA, whose papers are deposited at the Library and Archives.

* The Tipton County World War I Letters Collection consists of twenty-nine letters written by soldiers from Tipton County while serving in France and England during the fight and immediately afterward. The correspondence was to be published in the writers’ hometown newspaper, The Covington Leader.

* James Franklin Corn Papers describe the activities of the 117th Infantry Regiment of the Old Hickory Division. Included are personal correspondence, regimental newsletters and reunion materials, general orders, and documents related to the division in both world wars.

* The Four-Minute Men Association was a patriotic organization created to unite the nation behind the Liberty Loan drives of World War I. Making their presentations in local theaters, the members were encouraged to speak only four minutes. Liberty Loans were used to fund the war for the Allied cause.

* Map 2430. Twenty-five maps pertaining to the operations of the 33rd Division, AEF.

* Posters on Stack 8, Drawer M-7-6. These striking propaganda posters were printed by the government to promote enlistment and raise money for the war effort.

* Record Group 36 (Ex-Soldiers in World War I, 1917-1919) consists of abstracts of WWI service records compiled during the 1920s. The bound volumes include data on age, place of birth, enlistment & discharge dates, and unit and branch in which the serviceman fought. Arranged alphabetically by county, then surname. The index to the names in the record group is available on the Library and Archives web site. Microfilmed

* Record Group 239 (Tennessee WWI Veterans’ Questionnaires)
includes a wealth of information about more than 4,400 veterans of the Great War. The surveys include dates & places of birth, occupation, parents’ names, battles, honors, casualties, and company, regiment, and division. The entries are indexed by surname. Microfilmed

* Record Group 53 (WWI Gold Star Questionnaires, 1918-1924)
holds surveys on soldiers, sailors, and Marines who died in combat or from disease. The questionnaires were sent to the families of each man who was awarded a Gold Star upon his death. The families of the “Gold Star Boys” responded with service information, photographs, military-related correspondence, and a few diaries. The letters contain some colorful descriptions of battles and fellow soldiers. Index available online. Microfilmed

* Microfilm 1859 (Correspondence of The Military Intelligence
Division [MID] Relating to “Negro Subversion,” 1917-1941). Documents in the National Archives from WWI, especially within MID. They relate primarily to the activities of African Americans in civilian and military life during WWI and the postwar era. For balance see Emmett Jay Scott, Official History of the American Negro in the World War, ca. 1919. D639.N4 S3

* Microfilm 1438 (Draft Registration Cards, Tennessee, 1917-1918 contains the World War I Selective Service draft registration cards for Tennesseans, 1917-18. This is an alphabetical listing by county of Tennesseans who registered for the draft during World War I. Information includes full name, date and place of birth, race, citizenship, occupation, personal description, and serial number.