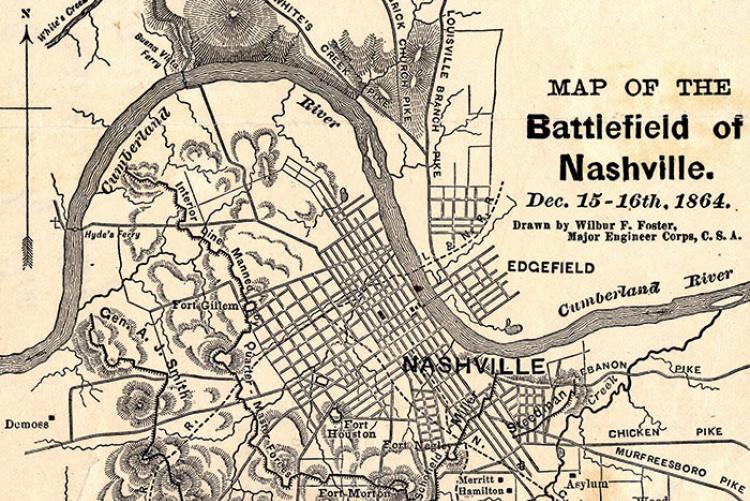 Map of the Battlefield of Nashville

The purpose of this survey is to acquaint the public with the maps and the resources for finding maps in the Tennessee State Library and Archives. Maps are invaluable components of historical and genealogical research, and documentary records often cannot be fully understood without reference to them. We have a large and varied collection of historical and contemporary maps available for public use - a collection that, by and large, is under-utilized. Use of this guide will make access to these maps and the information they contain a little easier.

Anyone looking for maps should always start with the Map Catalogue in the Manuscript Section. The entries in that catalogue represent the core of our map collection, as well as the best single source for locating the right map. Many of these maps are originals, some have been photocopied or encapsulated, but others remain untreated and in fragile shape. Many individual maps taken from atlases and other published sources have been copied or removed from their binding and put in the collection; they are integrated in the Map Catalogue.

While the county, city, or town name will be your main subject heading in searching the Map Catalogue, you should be aware that relevant material might appear under larger headings such as "Tennessee", "Middle Tennessee", or "Southeastern States". A map that encompasses a more general geographical area may yet contain important features and details about a particular county or locale. The catalogue entries will provide certain information about what one may expect to find on a particular map, and both the catalogue and the Manuscripts staff should be consulted to try to determine the right map.

Among the most commonly asked questions regarding maps are the following:

1) HOW CAN I LOCATE A PARTICULAR COMMUNITY, STREAM, SCHOOL, CHURCH OR CEMETERY? Often features like streams, cemeteries, and churches, that are still present, are best located on modern maps such as county highway maps and the U.S. Geologic Survey topographic maps. Both types of maps are quite detailed and go to great lengths to name most features, so they can be useful for identifying creeks named in old deeds, hollows and roads named after a particular family, or historic cemeteries. Volume 4 of the Omni Gazetteer provides a simple, statewide index to all place-names in Tennessee and identifies the quadrangle map on which a particular feature can be found. If a place-name has completely disappeared from the modern landscape, then it may be necessary to use an older map to identify the earlier site, in conjunction with a published finding aid such as Morris and Rhea's Tennessee Gazetteer 1834, the guide to Tennessee Post Offices and Postmasters , or a county history. One group of older maps that is especially thorough and precise in its naming of features is the Division of Geology series, done for various Tennessee counties between 1915 and 1935. The Post Office - Rural Free Delivery county maps in this series are also very useful for locating historic roads, communities, and even residences.

2) WHERE IS A PARTICULAR CIVIL DISTRICT? There is a series of 1836 maps for many counties that shows civil district boundaries with descriptions. The Beers Company demographic maps and the Division of Geology - Post Office series also show the configuration of civil districts at particular times. Census compendia (1870 and 1880) and descriptions of census enumeration districts (1900 and 1910) can provide communities and place-names associated with certain civil districts. All these sources must be used with caution, since civil district boundaries may shift frequently. Boundary line changes may be gleaned from the Acts of Tennessee.

3) WHERE DID MY ANCESTOR LIVE? Between 1871 and 1907, the Beers Co. of Philadelphia did a series of maps of Tennessee counties showing landowners' names and the approximate location of their farms. These maps are available for Bedford, Davidson, Gibson, Giles, Hamilton, Haywood, Knox, Madison, Marshall, Maury, Montgomery, Rutherford, Shelby, Sumner, Williamson, and Wilson Counties. There are two Civil War maps for Middle Tennessee (Maps #139 and #2519) that show farmers' names on the land. We also have a set of 1939 - 1941 TVA land ownership maps (Record Group 70, mf.) showing the names of property owners and the boundaries of their property over much of the Tennessee Valley. Other than finding their ancestor's name on one of these maps (a rough approximation, at best), the best way for a researcher to learn the precise location of an historic homestead is to do a property title search through careful use of the deeds and related records.

4) WHERE WERE PARTICULAR ROADS, FERRIES, CAMPS, RAILROADS, AND OTHER HISTORIC FEATURES? Early statewide maps, such as those of Matthew Rhea (1832), the District Surveyors (1806 - 1819), and the Civil War engineers provide good depiction of the road system, ferries, communities, and churches. Specialized maps will show the locations of Civil War camps, railroads, iron furnaces, river landings, etc. The best maps for locating extant cemeteries (other than small family burial plots) are the modern county highway maps.

We do not have maps of early land grants in Tennessee, except for scattered plat books and drawings for certain locales. The plats for the North Carolina military grants are included with the warrants of the Secretary of State's Land Office in Raleigh, N. C. (Mf. 1177).

The Map Catalogue is fairly well up-to-date with respect to the collection; each time a map is added, so is a catalogue card that gives basic information about the map. Every effort is made to consolidate our map collection by bringing newly discovered or out-of-the-way maps to the attention of an archivist, so that they may be copied and added to the central map file in Manuscripts. This is especially true for fragile, folded maps tucked away in older published sources. There are many atlases, fire insurance plat books, and maps in the Congressional Series whose handling and copying by patrons should be limited. Library staff should exercise caution in pulling such early editions from the stacks, particularly since the maps they contain are often available in microfilm or microfiche.

Researchers looking for geographic information of a general nature -- e.g. "What did the U. S. look like in 1815?" , "Where is County Down in Ireland?", or "What migration routes might Pennsylvanians and Virginians have taken into frontier Tennessee?" -- can consult our large collection of atlases. Some of our best early maps of the state were published in American atlases. In addition to the early imprints themselves, we have most of the good historical atlases issued in recent years. A brief list follows:

Many of our atlases are to be found in "Oversize" section. "Oversize" atlases include the following:

Gazetteers, generally, are guides to place names and transportation routes. We have American editions as far back as 1798. They often contain beautiful, hand-drawn maps in pocket folios. There are, in addition to the very useful Eastin Morris Tennessee Gazetteer (1834), various Tennessee gazetteers ranging in time from 1860 to the present. Community names found in Tennessee gazetteers from 1876 - 1906 are indexed in two catalogue drawers in the center lobby / exhibit area. A number of more general U. S. Gazetteers and emigrant directories can be found in F353 and E164. Gazetteers were written as guides for prospective emigrants and, thus, are very good sources for frontier turnpikes, stage routes, steamboat landings, and other transportation features.

These are excellent early 20th century maps which, like the Geologic Atlas maps listed above, show a great deal more than soil types and topography. The better ones in the series show house sites, schools, roads, ferries, and even name each hollow and ridge.

Located in the G3961 call number area are the Geological Maps and Mineral Resources summary, Tennessee Division of Geology. These packets contain map folios with accompanying text on mineral resources for all Tennessee quadrangles. Use in conjunction with Place Names of Tennessee, Bulletin No. 73, TN Division of Geology (1974) or volume three of the Omni Gazetteer of the United States of America (1991). These volumes refer all standard place-names (towns, cemeteries, hollows, churches, schools, etc.) in Tennessee to the quadrangle map on which they appear.

Maps published in book form can be found by searching the Public Catalogue under an appropriate subject heading. For instance, if you searched the catalogue under "U. S. History - Civil War - Maps", you would find the following:

Various map index books and guides to map collections in other repositories are in the Library and Archives' Reference Room, catalogued under the Z 6000 call number area.

These guides can be useful to researchers who need to find maps on a particular subject, even if they are held in another facility such as the National Archives or Library of Congress. Obviously, there are many maps of Tennessee which we do not have. Other reference works catalogue the maps in publications that we do have, such as the Serial Set. Map guides and indices can be quite helpful to the "in-depth" historical researcher.

Uncatalogued maps can be found in various manuscript collections. Most of the time, such maps are limited to one or two miscellaneous items identified in the register. Occasionally, however, a collection will contain a number of historical maps on a particular locale or subject. Following is a brief descriptive list of such collections. This is by no means all the maps in manuscripts - only examples of collections with especially large or significant map holdings