Worth a Thousand Words: Photographs and Images at the Tennessee State Library and Archives 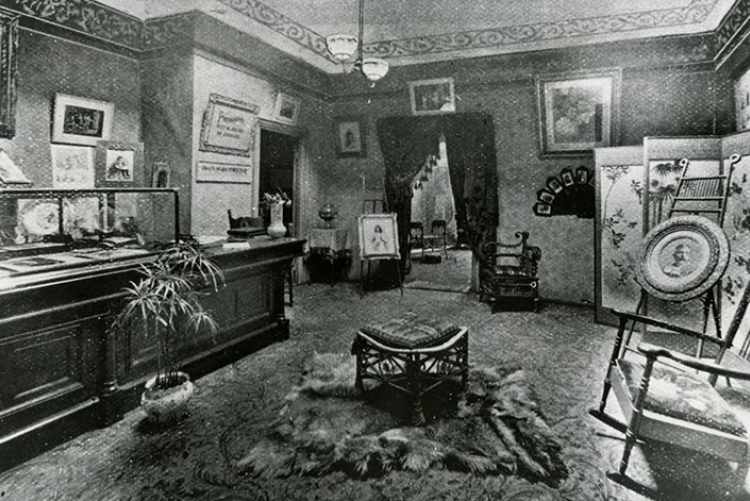 Among the greatest assets at the Tennessee State Library and Archives is the variety of its photographs. Myriad images populate our holdings, many of them rare. The collections highlighted here represent a fine assortment of imagery. For other collections, see the Tennessee Virtual Archives (TeVA), online exhibits and the online photograph and image database. The photo database contains thousands of images taken from major collections, while the online exhibits include dozens of pictures featured in displays staged at the Library and Archives. TeVA presents digital highlights of Tennessee history and culture and provides a searchable array of historical records, photographs, documents, maps, postcards, film, audio and other original materials of enduring value.

While the following items and collections highlight the Library and Archives' holdings on the state’s built environment, patrons are advised to consult librarians and archivists when pursuing specific research questions.

Sabin Photographic Collection, 1870-1972. Here one can find extraordinary photographs of the people and scenery of Reelfoot Lake in Northwest Tennessee. Said to be created by the New Madrid earthquakes of 1811-1812, the lake is popular for its good fishing and bald cypress trees which Verne Sabin captured in awesome detail during the 1920s. The collection also includes pictures from World War I (including anti-war demonstrations), World War II, and scenes from Union City in the early twentieth century. TSLA Mf. 1503

Rugby Collection, 1880-1919. This Victorian haven for "second sons," shaped by the British rule of primogeniture, began as a utopian colony in Morgan County in East Tennessee. Founded in 1880 by English social reformer Thomas Hughes, the settlement thrived for several years. Rugby colonists created informative visual documentation, some of it preserved at the Library and Archives. Settlers are shown at work and recreation. The collection contains pictures of animals, families, buildings, landscapes and the quaint and architecturally interesting Christ Episcopal Church. (Not microfilmed)

Merl R. Eppse Collection, 1927-1961. Eppse, a history professor at Tennessee A & I (now Tennessee State University), collected dozens of pictures related to his career as a teacher and advisor. TSU, a historically African-American school, was founded in 1912 at the height of the Progressive Era. The collection contains photographs depicting student and faculty life, school sports, and Eppse’s community service. This is a first-class source for those interested in mid-20th century African-American education. TSLA Mf. 1214

Samuel A. Weakley Collections, 1795-1971. Photographs of the great East Nashville fire of 1916 show once fine homes and churches reduced to rubble. An assortment of Cumberland River scenes from Tennessee and Kentucky including floods, ferries and construction of locks is found within these volumes. Early 20th century Nashville public school classes and sports teams are well represented as are Chattanooga and Lookout Mountain images. One of Nashville’s most beloved Christmas traditions, the unique Harvey’s nativity scene at the Parthenon, is also pictured. TSLA Mf. 1330

Jack Knox Political Cartoons, 1932-1978. Knox was the political cartoonist for the Nashville Banner newspaper from 1946 to 1975, and his arch-conservative opinions are reflected in these 544 drawings. Themes include such diverse subjects as government and politics, corruption and reform, civil rights, charity, the Cold War, and the economy. TSLA Mf. 1684

Marr & Holman Architectural Papers, 1911-1929. Government and commercial buildings, as well as private residences in various phases of construction, are featured in this collection. Working mostly in Tennessee and Kentucky, the firm designed some of the most prominent structures of the 1910s and 1920s. Included are the Belmont Theater, Sulphur Dell baseball park, Nashville Post Office (now the Frist Center for the Visual Arts), Tennessee Home for Feeble Minded Persons, and Tennessee School for the Deaf. The School for the Deaf held special significance for Thomas Scott Marr since he was himself deaf. (Not microfilmed)

Joseph Cordell Carr Papers, 1900-1980. There are many noteworthy photographs in these papers of a distinguished figure and Secretary of State in mid-twentieth century Tennessee Democratic politics. Among these are autographed pictures of many state and national government officials and party leaders. Significant are signed portraits of presidents, governors, entertainers, and baseball heroes Casey Stengel and Mickey Mantle. TSLA Mf. 1657

Tennessee Academy of Science Papers, 1912-1986. The photographs in this important collection are archaeological in nature and deal primarily with Mound Builders and Native American artifacts. Organized in 1912, the TAS Papers are important for researching the development of scientific thought in Tennessee and the South. TSLA Mf. 1542

Wiles Photographic Collection, ca. 1896-1910. This assortment of 60 images was taken by well-known photographer Marvin Wiles in and around the Nashville area. Prominent in this collection are pastoral scenes, views of the 1897 Tennessee Centennial Exposition buildings, and pictures of children at Christmas and at other activities. (Not microfilmed)

Jacob McGavock Dickinson Papers. This large collection contains numerous albums relating to Judge Dickinson’s public career from 1890 to 1911. Notable are the albums recording his 1910 tour of the Philippines including the Culion leper colony. The papers are an especially rich source of photographs pertaining to Dickinson, Jr.'s importance to the Tennessee State Guard during World War II. TSLA Mf. 236

Luke Lea Papers, Frierson-Warfield Papers & Karl M. Kleeman Photo Collection. These three collections offer a thoughtful look at life on the Western Front during World War I. Two of them portray the wartime activities of the 114th Field Artillery, 30th (Old Hickory) Division, Tennessee’s only fully volunteer regiment. It was a storied unit that boasted a former governor and future senator. The Lea Papers (Mf. 1541) include images of Pershing and his staff, French battlefields, modern weaponry and many of Lea and his men–including the team that attempted to capture the Kaiser. The Frierson-Warfield Papers (not microfilmed) contain personal as well as Signal Corps photographs of battle fronts, the Hindenburg Line and destruction of the French countryside. The Kleeman Collection is the most graphic of the three and shows war carnage. Kleeman, of Clarksville, was a sergeant in the 115th Field Artillery. TSLA Mf. 1541

Gov. Prentice Cooper Papers, 1939-1945. Cooper was governor during a critical time in the state and nation’s history—World War II—and his papers reflect the significance of the era. The photographs portray a progressive administration in wartime and include the Tennessee State Guard, mental and correctional institutions, Camp Forrest, Hollywood actors, armories, and the Home Food Supply Program. TSLA Mf. GP 44

Roland A. Alven Collection, 1937. Images chronicling the catastrophic Cumberland and Tennessee River floods of 1937 show the vast damage to towns and countryside in Tennessee and Kentucky. More than 250,000 people were displaced during the floods and refugees flocked to higher ground. Many consider it to be the greatest natural disaster of the 20th century. (Not microfilmed)

Gilbert M. Johnson Papers, 1773-1910. The Johnson papers are best known for their large number of Civil War-related cartes-de-visite. The papers are especially strong on identified Union officers posted in Tennessee. Also included are scenes of Huntsville, Alabama, an ironclad, a Union shipwreck, and an 1866 bridal party at Lookout Mountain. (Not microfilmed)

RG 211. Tennessee General Assembly Composite Photos, 1885-1987. This record group contains thumbnail portraits of members of the Tennessee General Assembly. Each chamber is presented on a large pane that includes head and shoulder portraits of senators and representatives. In many cases, these photographs are the only known images of some of Tennessee’s state legislators. (Not microfilmed)

Byrd Douglas Family Papers, 1819-1968. This collection is important to students and scholars of river commerce and for those interested in steamboats. It contains 143 photos of Cumberland River scenes and boats that tread the river during the Civil War and early 20th Century. The papers include scenes of the Clarksville and Nashville wharves and early pictures of steamboats such as Rowena, CSA Ram Arkansas, and U. S. hospital ship Red Rover. Images of Cumberland Falls, locks and dams, Captain Thomas Ryman, and a WWII mine-sweeper are also included. TSLA Mf. 1547