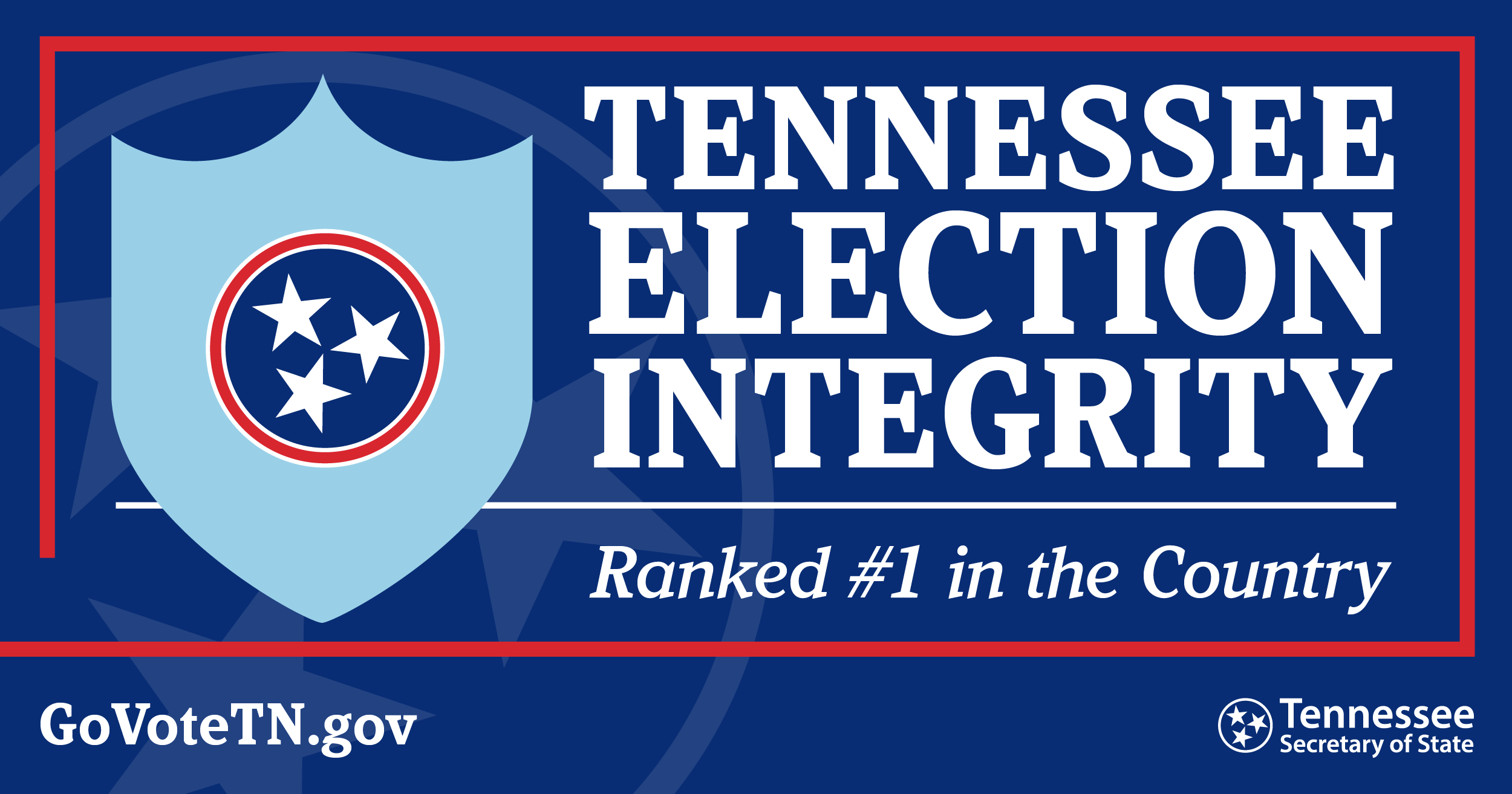 NASHVILLE, Tenn. – Thanks to the laws passed by the Tennessee General Assembly and administered by the Secretary of State and 95 county election commissions, Tennessee has the most secure elections in the country, according to The Heritage Foundation’s election integrity scorecard.

“I am grateful to the Heritage Foundation for this recognition and to all those who work on Tennessee elections, on both the state and local level, for their work protecting the integrity of Tennessee ballots,” said Lt. Gov. Randy McNally. “The General Assembly has long understood the importance of election security. From photo ID to making sure our counties are working towards producing a voter-verified paper audit trail by 2024, Tennessee has always been on the cutting edge of election integrity. As Secretary Hargett says, we are a state that makes it easy to vote, but hard to cheat. The General Assembly is resolved to keeping it that way.”

In The Heritage Foundation’s scorecard, the election laws of every state and the District of Columbia are ranked according to how well they protect the integrity and security of the election process. Tennessee earned perfect scores in categories regarding voter ID implementation, vote harvesting restrictions and vote counting practices.

“Election integrity is not a partisan issue, and Tennessee has set the national standard in protecting and preserving elections,” said Speaker Cameron Sexton. “Together, we have taken steps like simplifying the Election Day process, achieving greater transparency within election finance, and preserving the precision and accuracy of all votes so they remain legal. I appreciate Secretary Hargett, Coordinator Goins, Lt. Gov. McNally, and the General Assembly for their continued partnership as we all work together to keep Tennessee elections free, fair, and forthright.”

The Tennessee General Assembly has continually updated the state’s election laws to incorporate best practices to protect the integrity of the ballot box. While administering elections, the Secretary of State and Tennessee’s 95 county election officials have worked hard to ensure that every eligible voter’s ballot is counted once and only once.

“With our online voter registration system and generous early voting period we’ve made it easier than ever for Tennesseans to register to vote and cast a ballot,” said Secretary of State Tre Hargett. “Thanks to the legislation enacted by Lt. Gov. McNally, Speaker Sexton and the members of the Tennessee General Assembly, we have done this without weakening election security. In our great state, voters can trust in our election process.”

Tennessee's election laws ensure that Tennessee's voter rolls are accurate and only eligible voters can cast a ballot. To keep voter rolls up to date, voters can easily update their voter registration on GoVoteTN.gov. The Secretary of State's office also maintains voter rolls following list maintenance procedures. To make sure only eligible voters cast a ballot, Election Day registration is not allowed and Tennesseans must present a valid Tennessee or federally-issued government photo ID. Under Tennessee law, IDs issued by other states, private organizations and college student IDs are not accepted.

“Every day, our office works with legislators and county election administrators across the state to make sure our election laws protect the integrity of the ballot box,” said Coordinator of Elections Mark Goins. “We do this because we want every Tennessean to have confidence in our elections systems and see that in the Volunteer State, it’s easy to vote and hard to cheat.”

To learn more about election integrity and voting in Tennessee, go to GoVoteTN.gov or call the Division of Elections toll-free at 1-877-850-4959.